Palau Unveils 'Lady of the Sea' Carving at SPREP 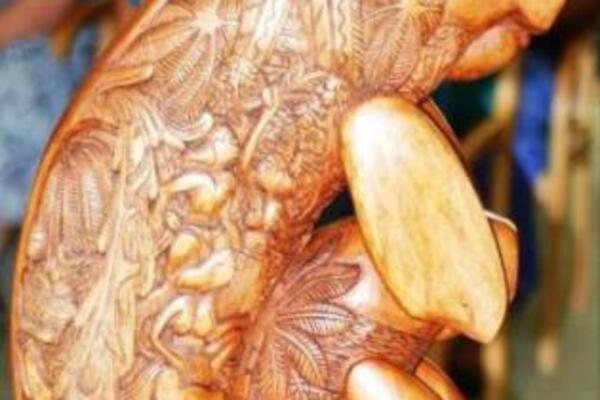 20 July, Samoa - A tribute to the Year of the Dugong was unveiled by the Vice President of Palau Hon. Kerai Mariur in Samoa yesterday as their contribution to the Secretariat of the Pacific Regional Environment Programme (SPREP) for their work on the conservation of dugongs in the Pacific, including the 2011 Pacific Year of the Dugong Campaign.

The stunning carving of a dugong (also known as the 'lady of the sea')was gifted to SPREP from the Government of Palau who are environmental leaders in the effort to protect marine species.

Palau was declared as the world's first shark sanctuary in 2009, this was further strengthened in 2010 through extending the protection to include all marine mammals including dugongs.

During a special unveiling ceremony at the SPREP headquarters in Apia yesterday, the Vice President of Palau expressed their appreciation to SPREP for their generous assistance to Palau and the Pacific region. The presentation of a special letter from the President of Palau to SPREP, the gifting of the carving and a copy of the "Mesekiu" booklet was made.

"This is symbolic of our national commitment toward conservation efforts," said Vice President Mariur.

"The designation of the 'Year of the Dugong' is indicative of the enduring efforts of SPREP to continue to lend its assistance toward the protection and preservation of the ecological and rich marine ecosystems that sustain the balance of nature that our Pacific Island Countries continue to be dependent on."

Palau was recognised for the Environmental Leadership shown by the nation with the presentation of a Certificate from SPREP. The Pacific nation was host of the regional launch of the Pacific Year of the Dugong and has since prepared many different resources to help conserve this species which is vulnerable to exctinction.

"There is a saying, 'actions speak louder than words', and we must congratulate and commemorate Palau because they are taking positive actions and we are encouraged by these important efforts," said Kosi Latu, the Acting Director of SPREP.

To learn more about the Dugong and hear the Dugong Song produced by Palau please visit the Pacific Year of the Dugong Website: http://www.sprep.org/Biodiversity/PYoD/index.asp