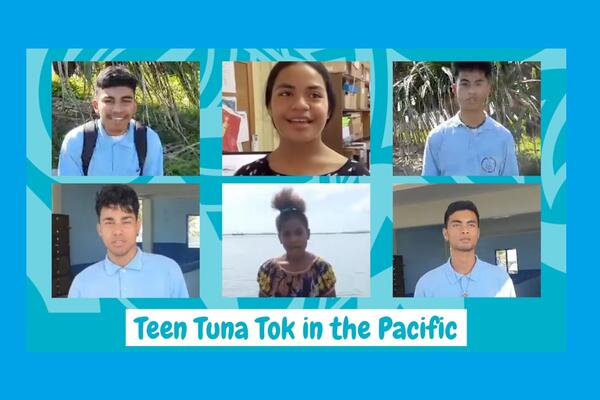 “Engaging in meaningful conversations with young people, who make up more than half of our population in the Pacific, is key to improving understanding of one of the few primary industries accessible to all Pacific Island economies,” said FFA Director General Dr Manu Tupou-Roosen.
Source: Supplied
Share
Monday, 03 May 2021 10:55 AM

Amplifying the voices of young Pacific people and addressing their questions and concerns is at the heart of the Teen Tuna Tok campaign, launched this week to mark World Tuna Day (Sunday 2nd May 2021).

The social media campaign, a joint initiative from the Pacific’s lead agencies working with Tuna, has received entries from teens from across the Pacific from Kiribati, Papua New Guinea, the Federated States of Micronesia to the Marshall Islands and Tonga.

“Engaging in meaningful conversations with young people, who make up more than half of our population in the Pacific, is key to improving understanding of one of the few primary industries accessible to all Pacific Island economies.”

SPC’s Director Fisheries, Aquaculture and Marine Ecosystems (FAME) Division, Neville Smith, said it’s a credit to these teens that they are engaging with the scientists and experts. “The Western and Central Pacific Ocean (WCPO) is currently the only ocean region with all four key tuna species in a healthy state, being neither overfished nor experiencing overfishing,” said Mr Smith. “We know that this is not a commonly known fact and we see that reflected in some of the questions from the teenagers. Teen Tuna Tok has been a great opportunity to share the science and create what we hope will be an ongoing dialogue with Pacific Youth.”

The second phase of the Pacific’s World Tuna Day celebrations will see the launch of a video animation. The animation details the work of the organisations contributing to the Pacific’s record as the largest and most sustainable tuna fishery in the world. This includes the work of SPC FAME, FFA, Parties to the Nauru Agreement (PNA) and the Western Central Pacific Fisheries Commission (WCPFC). https://youtu.be/X6rzc4WNSvU

World Tuna Day evolved from a Pacific-driven UN resolution in 2016. The aim of the day is to raise awareness of the value of tuna, the threats facing tuna populations and the economic and social benefits of sustainably managed tuna stocks, and to share best practice.