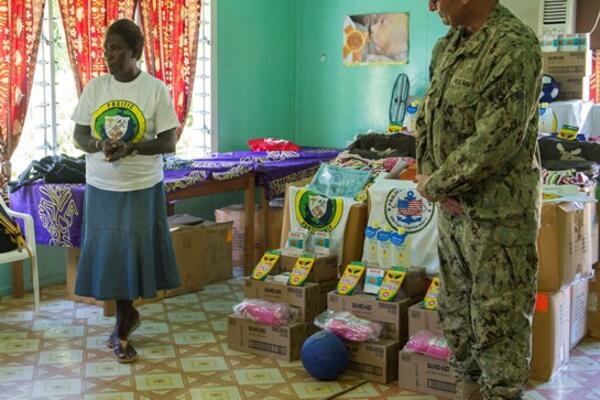 Randy Solomon, president of the Western Province Council of Women said she was grateful that her organization was chosen to receive the donations as well as meet the people of Pacific Partnership.
Source: Photo Supplied
Share
Tuesday, 06 August 2013 08:13 AM

The local group, which helps women in their communities through economic and educational empowerment, received hygiene items, school supplies and clothing to help the women and children of two smaller islands near Gizo.

Project Handclasp is a worldwide outreach program that accepts and transports educational, humanitarian, and goodwill materials donated by America’s private sector on a space-available basis aboard Navy ships.

“It’s an opportunity for them to know that in many parts of the world women play a big role in society, not just men,” said Vinluan.

U.S. Navy Lt. Bruce Hansen, a civil affairs officer who facilitated the donation, gave a brief overview of the Pacific Partnership 2013 mission and had each Sailor introduce him or herself to the women’s council, putting special emphasis on the fact that many women and men perform the same duties and jobs in the U.S. Navy.

Randy Solomon, president of the Western Province Council of Women said she was gratitude that her organization was chosen to receive the donations as well as meet the people of Pacific Partnership. She also noted that the women of Solomon Islands do not have as much equal opportunity as the women who introduced themselves at the event.

“We are so grateful to be recognized,” said Solomon. “I know that the communities will really appreciate this.”