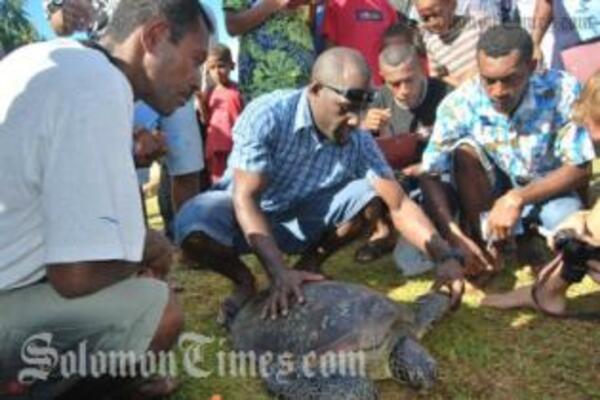 Mr George Petro, of the Vanuatu NGO and Theatre Group Wan Smol Bag, has been recognised internationally for his tireless efforts in turtle conservation in his country.

Petro has won an International Sea Turtle Society (ISTS) Champion Award of 2012. His nomination was supported by the Secretariat of the Pacific Regional Environment Programme and the WWF South Pacific Programme.

Petro has been involved in turtle conservation for over 15 years through his work with Wan Smol Bag and has, among his list of achievements, the reduction of traditional turtle harvest in the Maskelyne Islands from 300 to less than 50 each year. Petro was a significant catalyst in the negotiations with the local communities.

"We are very pleased that George Petro received this award as it is well deserved," said Mr Lui Bell, the Marine Species Officer of SPREP. "His hard work has achieved valuable outcomes for sea turtles. It's great to know that a Pacific island person has received such international recognition for this award."

George Petro is a turtle conservation officer with Wan Smol Bag, which has been instrumental in the strengthening awareness of turtle conservation in Vanuatu that initially began with a plan that toured the villages in Vanuatu. This led to a network of Village Turtle Monitors, now called Vanua-Tai Resource Monitors, who currently number over 500 and cover over 80% of the country.

The Monitors initially focused on conservation and sustainable use of marine turtles but have proven to be invaluable in documenting marine turtle occurrence and nesting beaches, tagging turtles and carrying out research.

A 2005 survey suggested that the Vanua-Tai network in only five villages had conserved over 1200 marine turtles. Extrapolated over the whole of Vanuatu this would amount to over 10,000 turtles conserved. The network has subsequently expanded to involvement in broader marine resource issues including coral reef monitoring and marine resource conservation.

George Petro has facilitated training and communications within the Vanua-Tai network in Vanuatu as well as carried out nesting beach surveys that have helped identify previously unreported leatherback, green and hawksbill nesting.

"He shared his experience and expertise through a SPREP project that has resulted in the establishment of monitors in 10 communities across Fiji."

This project was funded by the Critical Ecosystems Partnership Fund and jointly implemented with WWF South Pacific Programme as the national leading partner.

A copy of the Wan Smolbag DVD 'Vanua-Tai: of Land and Sea' may be obtained on request through olrisos@wansmolbag.org.