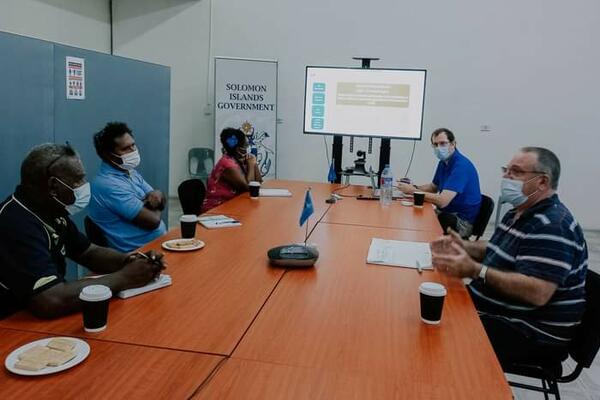 On the agenda at Monday’s initial discussion were HCC’s building usage, waste and rubbish collection, City beautification and the benefits Honiara as a City will get as Host City for the Pacific Games.
Source: Supplied
Share
Wednesday, 09 March 2022 17:10 PM

The Sol2023 Games Organizing Committee (GOC) held a meeting with representative of the Honiara City Council (HCC) on Monday 7th March 2022 to have initial discussions on how the two organizations can align their operations in preparation for the hosting of the region’s biggest sporting event in 2023.

From a Games’ perspective, HCC as the Host City plays a crucial role and responsibility in the preparatory work and in the actual delivery of the 2023 Pacific Games.

“Solomon Islanders can have confidence in all the efforts the responsible committees are undertaking to deliver these Games. Despite all the strict COVID measures, we will make the Games secure and safe,” GOC Chief Executive Officer, Mr. Peter Stewart, said.

“Our goal is a safe and secure games for everybody; for the athletes, for all delegations, and most importantly also for the people of Solomon Islands,” he added.

As such, it is important that Honiara City must be well prepared and ready to host 5,000 athletes and officials from 24 Pacific nations including Australia and New Zealand and those from our provinces who are expected to also travel to Honiara for the Games.

On the agenda at Monday’s initial discussion were HCC’s building usage, waste and rubbish collection, City beautification and the benefits Honiara as a City will get as Host City for the Pacific Games.

Also present at the meeting was Sol2023’s Senior Manager Venues and Operations, Mr. Jack Smith who has a vast experience in delivering an event of this magnitude and was also part of the 2017 Pacific Mini Game in Port Vila and the 2019 Pacific Games in Samoa.

“We are looking to support the normal growth of the City where we can grow services in the long run and we are more than willing to support existing HCC programs that will have a long term legacy,” Mr. Smith said.

Waste disposal and waste management at the Games venues was something that was highlighted as one of the most important aspects of the collaboration between HCC and the Games Organizing Committee.

There will be eight (8) main venues for the Games sports program and seven (7) Games Village venues producing an expected 60 tonnes of waste per day for two weeks.

Other important areas the GOC will be working with HCC on in preparation for 2023 are on the beautification of the City, road and transport system and signboards, toilet facilities, health Services, enforcement and other facilities in the City.

CEO Mr. Stewart highlighted that the successful delivery of the 2023 Pacific Games will depend on the collaborative efforts from everyone including Government agencies and relevant stakeholders.

The GOC looks forward to continue its engagement with the HCC and other relevant stakeholders as it continues with its preparation to hosting a uniquely Solomon Islands Games in 2023.