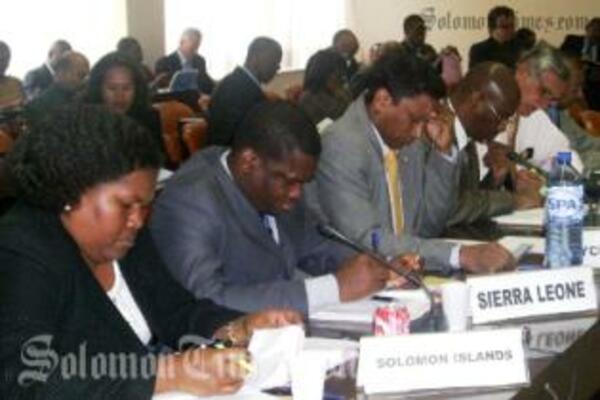 Pacific ACP States have reiterated their desire to see progress in the current negotiations of the Economic Partnership Agreement (EPA) with the European Union but want contentious issues be dealt with by the EU.

Speaking on behalf of the Pacific ACP Group, the Associate Minister for Trade, Commerce and Industry of Samoa, Hon. Hans Joachim Keil, told the 8th Joint ACP-EU Ministerial Trade Committee in Brussels, Belgium last week that the contentious issues are of great importance to the Pacific ACP region and they must be addressed.

"These contentious issues will need to be dealt with for us to progress in the negotiations," he said.

The meeting, which was co-chaired by Commissioner Baroness Catherine Ashton and attended by most of the ACP regions, highlighted the difficulties ACP faces in the negotiation process of the EPAs.

In the Pacific region, only Papua New Guinea and Fiji initialled an Interim EPA mainly to protect their exports of fish and sugar, respectively, into the EU markets.

Mr Keil told the meeting that the Pacific region continues to work with the European Commission for the eventual conclusion of a comprehensive EPA.

He said while considerable progress has been made on some areas in the draft comprehensive EPA text, substantial differences still remain on a number of contentious issues, making it impossible to conclude a comprehensive EPA because of the wide differences between the two sides on many technical issues.

The minister said: "Over the past few days, our discussions have highlighted that there is striking similarity on the challenges faced by all the ACP regions as they work towards the conclusion of a full and inclusive EPA."

Despite these challenges, the Samoan minister said that the region has affirmed its commitment to concluding a comprehensive EPA with the EC.

He emphasised that EPAs must go far beyond market access arrangements and constitute a trade and development cooperation agreement that will form the basis for the elaboration of a true, strengthened and strategic partnership over time between the ACP States and the European Union.

Meanwhile, Mr Keil acknowledged with deep appreciation the positive stance that some EU member states have taken by advocating more flexibility in the EPA negotiations.
He praised Trade Commissioner Baroness Ashton's willingness and assurance to instil maximum flexibility in the EC's approach to the PACP-EC negotiations on the comprehensive EPA.