Our Submarine Cable Has Landed: Sogavare 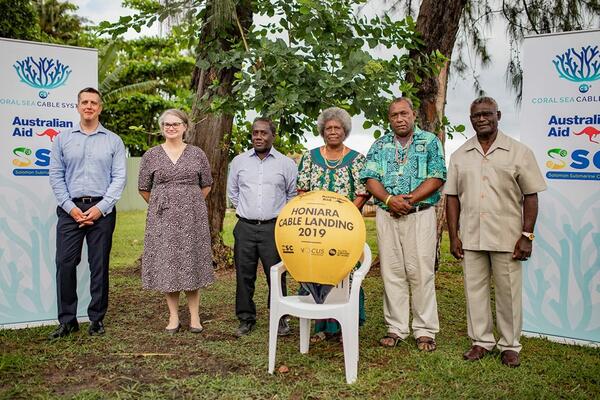 Prime Minister Hon. Manasseh Sogavare has proudly announced the landing of the submarine cable on the shores of Honiara.

Embracing the uniqueness of the occassion the Prime Minister reflected on Ecclesiastes chapter 3 verse 1 and read ‘there is a time for everything’ – this morning is the time to celebrate the landing of our submarine cable.”

The Prime Minister further took the opportunity to make acknowledgements to God and to the traditional landowners of Honiara and the foreshore on which this submarine cable has landed.

“Honoured Chiefs and Representatives of your tribes, on behalf of the Democratic Coalition Government for Advancement (DCGA) I thank you and the people of your tribes for joining your government as partners in this historic journey that will help transform and propel our nation into the communication age of the 21st century,” said the Prime Minister.

He further adds, “I am immensely proud and honoured that the Democratic Coalition Government for Advancement is the first sitting government since this country’s Independence 41 years ago, to formally recognise you, the traditional landowners of Honiara and its foreshores.”

Hon. Sogavare also paid homage and tribute to the chiefs and tribal representatives for choosing to be partners with the government in this endeavour by helping all peoples of Solomon Islands to benefit from the submarine cable.

In relation to the ownership of all foreshores in the country, the Prime Minister also highlighted the policy of the DCGA to return the ownership to traditional and customary owners throughout the country.

“Our seas and foreshores carry values that should not be sacrificed to individual owners. My government is addressing the return of foreshores to customary owners as a matter of priority,” he said.

The event was also attended by senior officials from the government and private sectors.