Opposition Says It Will Not Support Government Plans to Extend Parliament 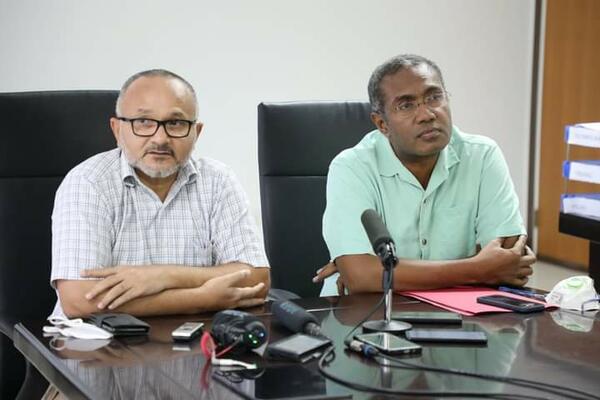 Hon Wale said he is certain that likeminded leaders in the government are also uncomfortable because they know this is not in the best interest of the people in this country.
Source: Supplied
Share
Friday, 11 March 2022 16:54 PM

The Parliamentary Opposition Group will not support any move by the Government to extend the life of Parliament from 4 to 5 years.

Opposition Leader Hon Wale said the Opposition does not have the numbers if this goes to Parliament but they have common sense and good reasoning.

“We will present our argument in Parliament when the time comes. We understand other factors and interests will be at play but we hope common sense will prevail,” he said.

Hon Wale said he is certain that likeminded leaders in the government are also uncomfortable because they know this is not in the best interest of the people in this country.

“We are fully aware of the attitude of the current government that winner takes all and the sentiments always echoed in Parliament that they are the government, they have the numbers and they make decisions but we hope common sense will prevail,” he said.

The Opposition Leader said the assumption and negligence by the government to think that the amendment to extend the life of Parliament is welcomed by the people is of great concern.

He said the law is very clear that elections must happen next year.

“And for the Prime Minister and Cabinet to think that granting themselves an extra year is an excuse to make things happen is imprudent. Even the Prime Minister run as an independent in the last elections and Our Party never existed so surely this was never a policy issue that seek the mandate of the people, ” the Opposition Leader said.

Hon Wale said this is the kind of attitude of a government that should never be trusted.

Hon Kenilorea said what the government is attempting to do is breaking the very foundation of the House.

He adds consultations must be nationwide and such agenda should not be bulldozed for self-interests.

Hon Kenilorea said it is sad when leaders think that people in this country lacks common sense.

Meanwhile, the Opposition Leader said if Cabinet wanted to proceed to amend the constitution in Parliament then the obvious option is to seek legal advice for a judicial review.

He said the Opposition is aware that politics will be at play and the timing and political ploy to affect the election process is likely.

Hon Wale said the Opposition is also closely watching the 2022 budget as the expectation is for an increased budget for the election registration process.

“If the budget shows otherwise, it is a clear indication that the government is trying to blackmail the country to make sure the registration is not updated and election preparation is undermined,” he said.