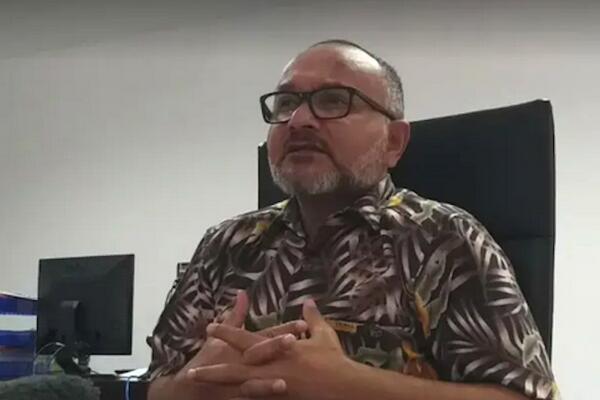 “This is a health crisis and all information are important and necessary for people to be well informed and so that we can establish a proper response strategy as well,” he said.
Source: APR
Share
Saturday, 22 January 2022 16:53 PM

Leader of Opposition Matthew Wale has urged the Government to come clean following inconsistencies in the Prime Minister’s recent addresses.

The Opposition Leader’s call came about following irregularities from information gathered from people from Ontong Java as well as crews on one of the ships.

Mr Wale said most of the statements issued by the Prime Minister and the Government are inconsistent with people from the island and the chronological order of events.

“In the PMs address on 18th January 2022, he announced that the foreign doctor from Tasman Island crossed the border with others to Pelau on 9th January 2022.

“The next day on the 19th January, the PM revealed in his address that we have a case in Honiara that arrived on MV Awka on 10th January from Luaniua. He never mentioned that the passenger nor the ship was in Pelau.

“Given the geographical location of Pelau and Luaniua, the doctor could not have infected anyone from that ship. So how can the foreign doctor in Pelau transmit the virus to the passenger on the ship from Luaniua,” he said.

The Leader of Opposition in his statement also questioned the Prime Minister’s statement on January 20th 2021 regarding the 23 positive cases of the crew in a particular vessel.

Mr Wale said the Prime Minister in his speech never mentioned that there was another vessel apart from MV Awka.

“We understand that the crew of MV Awka were only swabbed on (Friday 21st January 2022). The PMs speech on (Thursday 20th January 2022) announced 23 crews were tested positive. So the 23 cases were from which ship?” Mr Wale questioned.

The Opposition Leader said why did the PM choose not to reveal the name of the vessel.

“This is a health crisis and all information are important and necessary for people to be well informed and so that we can establish a proper response strategy as well,” he said.

However, the Leader of Opposition said his office had been reliably informed that the 23 positive cases were from the Solomon Prestige 2 vessel.

He said Prestige 2 departed Honiara for Ontong Java on Saturday 15th January, 2022 but was recalled back to Honiara on 16th January, Sunday night.

“The public was also never informed that Prestige 2 departed to Ontong Java and was recalled to Honiara on the above dates. Upon arrival, the crew on board tested positive for COVID.

“Interestingly, the ship never reached Ontong Java as it was recalled to Honiara because of the situation in Pelau. The question of how and where the crew got the virus and if it was transmitted by passengers on that ship from Honiara was never revealed in the PMs speech or any Government information for that matter,” he said.

The Solomon Prestige 2 is a makeshift fishing vessel that was also announced by the Prime Minister that it will deploy essentials and additional frontliners to Pelau earlier this week.

The vessel is owned by JQY.

The Opposition Leader acknowledged that this is no time to point fingers but in such health crisis, the Government must disseminate factual information and should not withhold information that is of public interest.

“It is either the Prime Minister and the Government deliberately chose to keep these information’s as secret or officials are providing inaccurate information to the PM,” Mr Wale said.

Meanwhile, the Leader of Opposition has reiterated calls for the Government to purchase a genomic COVID sequencing to determine the source of COVID-19 infections.

Mr Wale said his past calls for a genomic sequencing is to address such inconsistencies and to find out the source of the virus.

“These inconsistencies have raised a lot of questions on the source of the virus and whether or not it really came from Ontong Java or somewhere else,” Mr Wale said.