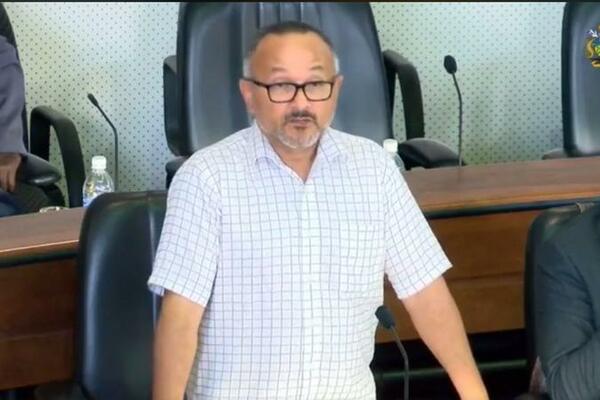 “Nobody questions the power of the Cabinet to make this decision. However, the public rightfully questions why the need to lie to the nation about it. That is how interests of foreign nations have become a source of disunity in our nation. The PM must take responsibility for it”, Wale told parliament.
Source: File: RNZ
By Georgina Kekea
Share
Wednesday, 02 December 2020 08:54 AM

Opposition Leader, Mathew Wale says the geopolitical competition must not become a source of tension in the country. Speaking on the floor of parliament during the Sine Die motion, Wale says the government must not allow the nation’s unity to be challenged by interests of outside powers.

“The Peoples Republic of China switch was within the prerogative of the Cabinet. The issue for the public of Solomon Islands is that the Prime Minister made a commitment, a promise to the nation and to this house that all provinces and constituencies would be consulted before a decision was made”, Wale says.

He says “we will leave no stone unturned” is now a regular cliche by the Prime Minister. Wale says there was no such consultations.

Wale says it is now water under the bridge now, but it raises the important issue of the government being defensive at the expense of common sense.

“Nobody questions the power of the Cabinet to make this decision. However, the public rightfully questions why the need to lie to the nation about it. That is how interests of foreign nations have become a source of disunity in our nation. The PM must take responsibility for it”, Wale told parliament.

He says in all decisions, the government must expect and embrace criticism and differing opinions.

“These are not private matters but decisions made on behalf of the entire nation, and it is right that people express their views openly on any of these decisions, especially decisions that have no mandate from the people”, Wale continues.

Since the government came into power, some of the decisions passed by cabinet that has raised public criticism include the switch to PRC, consultations with Huawei for the 200-tower project and the recent decision to suspend Facebook.

“As the PM said last week, all power in Solomon Islands belongs to its people and it is exercised on their behalf by the legislature, executive and the judiciary established by the constitution. Of course, when people lose trust in us and express this in a free and independent media, it questions our legitimacy, moral authority, and leadership. When people do this, we should listen.

“Why is there even talk of ‘breaking away’? Why is there disenfranchisement? Why are people frustrated with the lack of development? Is this not democracy’s way of saying something is not working?”, Wale said.

He says national unity and working together in a democracy is not defeated only because some people have different views to the government.

“Let us escape the immaturity that insists it is only when everyone agrees with the government on any issue that there is national unity and working together. In fact, in a democracy with such diversity as ours, we must not only expect but also embrace differences – that is critical to national unity and working together. Let us stop demonizing our own people. Is it not the power with the people?”

A ruffled Prime Minister was heard calling for order in parliament when the Opposition Leader said logging companies contribute cash to support the Prime Minister in politics.

The MP for Aoke/Langalanga spoke at length in parliament during the debate on Sine Die.