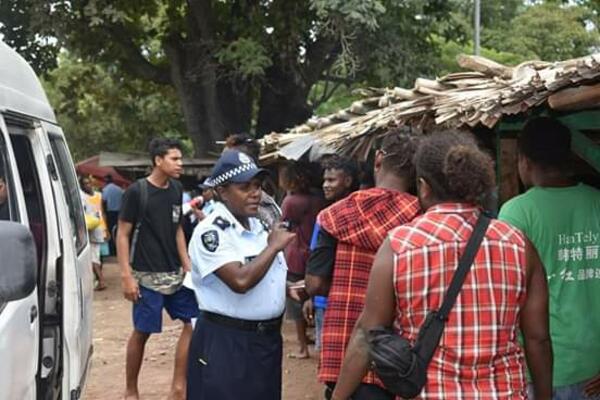 Officers of the Royal Solomon Islands Police Force (RSIPF) continue to conduct public awareness talks in Honiara as part of the ‘Operation High Visibility’ which started after the Solomon Islands Government made the decision to switch diplomatic relations from the Republic of China (ROC) to the People’s Republic of China (PRC) on 16 September 2019.

Led by officers of the National Crime Prevention Department, three teams of officers from Honiara City and the Rove Police Headquarters have visited communities, markets, bus stops, churches and other venues in East, Central and West Honiara to remind members of the public to respect law and order and not to take matters into their own hands.

Speaking as part of the team that visited the Savo, Tanagai and White River markets in West Honiara today Sergeant (Sgt) Mary Maneforu of the National Crime Prevention Department (NCPD), “I want to remind our good people to express whatever opinions you may have on the issue of PRC and ROC in a lawful manner and not to break the laws of our country. You are encouraged to speak with your Member of Parliament about the issue.”

“All citizens of Solomon Islands have the right to freedom of expression but all freedoms come with a responsibility. Any person in Honiara intending to stage a protest must apply to the Honiara City Council Clerk and the Provincial Police Commander, Honiara City 48 hours before the planned protest takes place. Let us respect our laws.”

“Police is ready to discuss with any group options for their consideration when they file an application to protest. The Processions and Public Assemblies Act outlines the conditions for any protest and organisers of any protest must fulfil these conditions," says Sergeant Maneforu.

She emphasises: “Police is concerned about public safety and that our laws are maintained during these difficult times.”

“Let us work together with your police to ensure there is no violence or disorder in our capital city. Members of the public are encouraged to contact their nearest police station or call phones 23666 or 999 if they have any information about anyone planning to cause any trouble,” says Sergeant Maneforu.

Some members of the public at the venues visited during the awareness have thanked the RSIPF for conducting the talks to educate the people about their rights and their responsibilities.

The three RSIPF teams will continue with the awareness talks in the various parts of Honiara until the end of the current Operation.