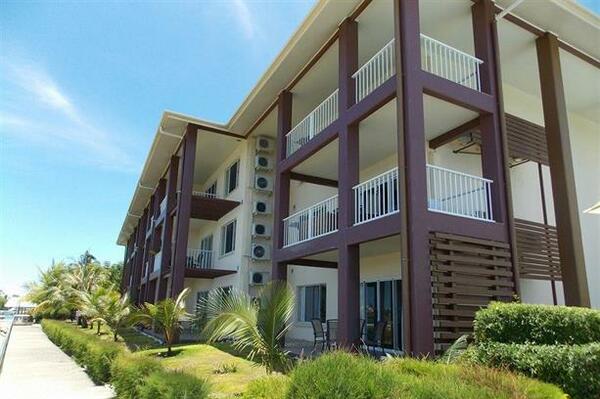 The flight crew were allowed to bypass quarantine but were kept in isolation during their short stay in Honiara at the Heritage Park Hotel.
Source: Supplied
By Georgina Kekea
Share
Thursday, 28 May 2020 15:01 PM

On Tuesday 26th May 2020, Prime Minister Manasseh Sogavare under regulations under the Emergency Powers (COVID-19) made this exemption for the seven flight crew.

The flight crew were allowed to bypass quarantine but were kept in isolation during their short stay in Honiara.

“They have not come through the front lobby but entered the hotel premises at the back. We have allocated the second floor on the other side of the hotel for their accommodation. Our hotel staff were not in close contact with them as they were looked after by staff from quarantine”, Mr. Bhargava says.

He said Heritage Park Hotel had initially refused government's request to be a part of the Institutional Quarantine Facilities.

“I had a phobia back then. That was back in March, April. A lot of grey areas, a lot of question marks. Back then it was a different situation. Now I have confidence in the frontliners. Whatever government is doing, it is keeping the people’s safety and security at the forefront. They will not be doing something to bring danger to the people. We have to have confidence”, Bhargava said.

He assured the people that precautionary measures have been made and trust in the system is all that one needs.

“These people are not sick. Proper procedures must have been done prior to their arrival, otherwise they would not have been allowed to travel”, Bhargava said.

Under the Emergency Powers Act, Prime Minister Manasseh Sogavare has exempted the following persons from being quarantined for the quarantine period;

They were said to be the only group of international travelers exempted from quarantine in Honiara.

The flight crew have since left Solomon Islands on Wednesday 27th May 2020.