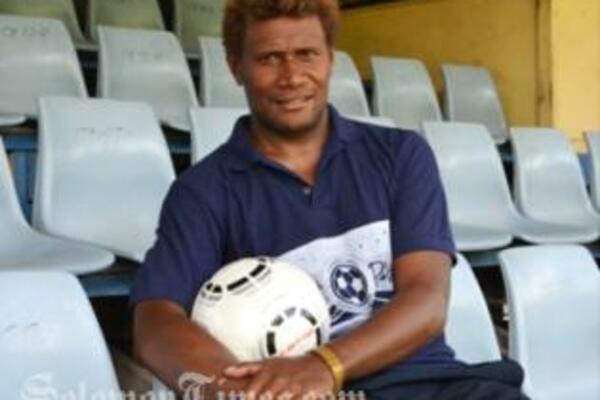 Gideon Omokirio wants to give something back to the sport that has brought him so much pleasure.
Source: ofc.com
Share
Wednesday, 11 January 2012 10:55 AM

Former Solomon Islands international Gideon Omokirio has produced many special moments on the pitch but is now focused on helping others do likewise.

The 34-year-old has not yet hung up his boots and is a key member of the Koloale squad competing in the 2012 O-League. But he now has a new responsibility as beach soccer development officer for the Solomon Islands Football Federation (SIFF) and is keen to pass on the skills picked up during an impressive career to the country's next generation of footballers.

Omokirio joined SIFF a year ago after spending over a decade as a bank officer and is keen to open a fresh chapter in his life as a coach.

"My aim is to give back to football by helping the young generations," he says. "I want to help them to play good football and change their attitude from being casual to a more professional approach so they can become good enough to play overseas."

The defender is an ideal figure to oversee the development of youngsters as he has achieved much during his playing days and boasts a CV bulging with highlights.

Omokirio has proved particularly adept at the beach form of the game and has taken part in four FIFA Beach Soccer World Cups for his country.

"They were all very good moments in my career," he says.

But his skills were not just limited to the sands and Omokirio made history by being part of the Hekari United squad that won the 2010 O-League - the first ever Pacific Island side from outside New Zealand to take the title in the region's leading club competition.

That groundbreaking success meant the Papua New Guinea outfit went on to compete at the 2010 FIFA Club World Cup in UAE, where Omokirio and co lost 3-0 to hosts Al-Wahda.

Omokirio played the full 90 minutes of the match, attended by nearly 24,000 spectators, and says it was an experience he will never forget.

"By qualifying for the Club World Cup, we showed that we could do it and that any team in the Pacific Islands can do it. A lot of teams in the Pacific want to reach this level and it is good for football in the region that we have shown it is possible."

The football lover still vividly remembers the moment Hekari overcame New Zealand side Waitakere United to win the O-League title and thus earn a place at the World Cup.

"I just couldn't believe that we had qualified," he says.

"It was a big achievement in my career. It takes a lot of commitment, energy and discipline to reach that level. I remember when the final whistle blew and I realised we had won the O-League - I can't find the words to describe that moment."

But even that memory cannot compete with an experience that stands out as the highlight of Omokirio's career.

He was lucky enough to play against former France international Zinedine Zidane - one of the true greats of the modern era - in an exhibition match held in 2008 to celebrate the career of Christian Karembeu, Zidane's former France team mate and OFC ambassador.

"During my time playing football I have achieved a lot of things," Omokirio says.

"Playing at the Beach Soccer World Cup and the Club World Cup are were two very good moments in my career. But playing against Zidane has to be my best moment. It is so difficult to play against him, he is very fast."

Omokirio's passion for a sport he first took up as a fresh-faced 10-year-old burns as brightly as ever and he remains devoted to the world game, whatever surface it is played on.

"I enjoy all the disciplines as long as they involve football. Beach soccer, 11-a-side, I love them both - it is all about football," he says.