Ofu Farewelled With Guard of Honour 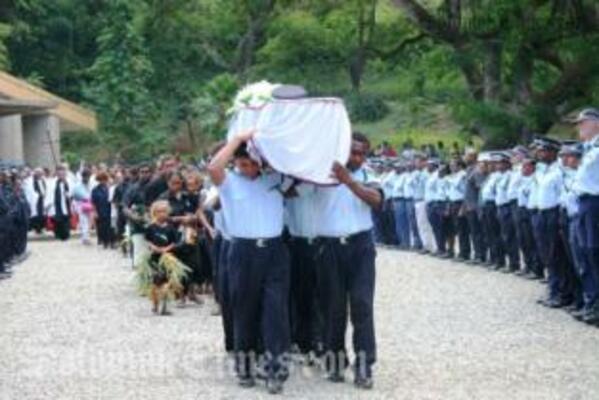 The late Jackson Ofu, Assistant Commissioner of the Royal Solomon Islands Police Force, was farewelled with a police guard of honour at his funeral service held in Honiara earlier today.

A large congregation of around 500 people, including family and friends, the Minister for Police and National Security and Corrections James Tora, Permanent Secretary Henry Pika and police force colleagues, gathered at St Barnabas Cathedral, Honiara today.

The Royal Solomon Islands Police Force Band played during the funeral service, whilst RSIPF and the RAMSI Participating Police Force officers provided a guard of honour. Coffin bearers were members of the RSIPF Police Response Team, trained in ceremonial duties.

Assistant Commissioner Jackson Ofu, aged 54 years, died at his home early on Friday morning after losing a courageous battle with throat cancer. His illness was diagnosed in early 2008 and, up until recently, he continued to work at his office at Police Headquarters, Rove.

His funeral service was led by Rector of St Barnabas Reverend Walter Devi and eulogies were given by his close friend Mr Wilfred Akao, Jackson Ofu's eldest daughter Diana Koelau and the Commissioner of Police Peter Marshall.
All spoke fondly of the way Assistant Commissioner Jackson Ofu demonstrated his integrity, loyalty, friendship, love, leadership and dedication in all aspects of his life.

"Jackson Ofu was a loved husband, brother, grandfather and family member," Commissioner Marshall said. "He was also an important and highly valued member of the RSIPF family."

Commissioner Marshall said that Assistant Commissioner Ofu was a dedicated and highly respected senior police officer who was an excellent ambassador for the RSIPF during training courses undertaken in New Zealand, the United Kingdom, Australia, New Caledonia and the United States.

"Jackson had a wealth of experience as a senior police officer, quiet wisdom, dignity, and a no-nonsense approach which will be sadly missed," Commissioner Marshall said.