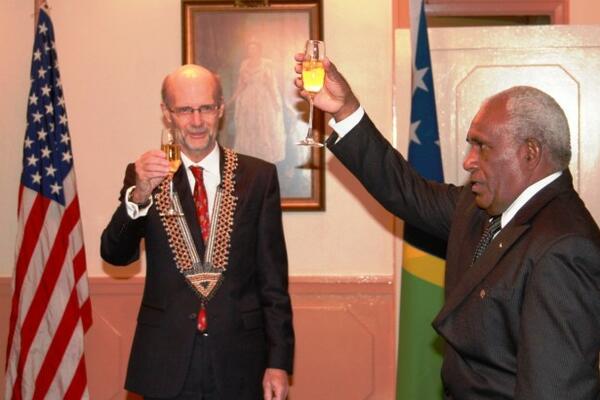 United States, President Barack Obama have supported the Solomon Islands’ vision for a brighter future for all Solomon Islanders.

This message was delivered to the Governor General, Sir Frank Kabui by the newly appointed US Ambassador to Solomon Islands, His Excellency, Walter North when presenting his credentials at Government House last week.

Ambassador North said President Obama and Outgoing Secretary of State Hillary Clinton have sent their greetings and best wishes to the people of Solomon Islands.

He said the US wants to play a constructive role in partnering with us to accelerate Solomon Islands progress.

Lately, the Solomon Islands Government has outlined an ambitious program of societal reconciliation, socio-economic development and continued investment in the institutions of democracy.

The post-conflict Solomon Islands have seen an acceleration of business activities, improved government service delivery and a robust pipeline of investment possibilities including the quality and reach of education.

Ambassador North said the US and the international community stands ready to work with Solomon Islands to translate those promises into sustainable, inclusive and transparent growth for the current citizens and succeeding generations.

“My Government has made a significant commitment to deepen its engagement,” said Ambassador North.

The US diplomat said the interest of Solomon Islands and its international friends can be achieved by the good collaborative work burnished by the very broad and important people to people contacts that both countries have.

“At the end of the day, though, it is not a story about the United States. It is about you country. We want to see Solomon Islands grow and thrive in today’s world and we want to be helpful,” Ambassador North said.