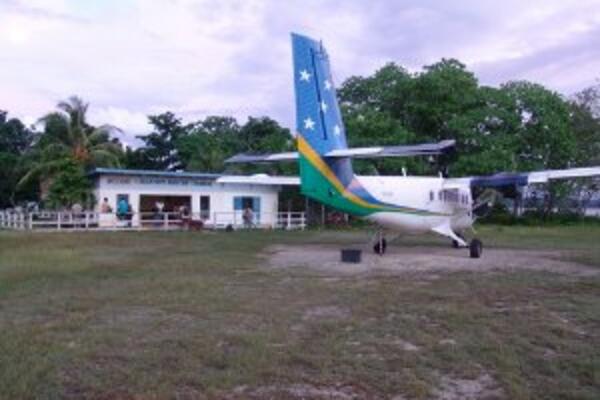 Solomon Airlines having a lot of trouble with blown tyres and damage to the aircraft on the Nusatupe airstrip will now be the thing of the past.
Source: Archives
Share
Thursday, 29 August 2013 08:00 AM

A remote runway in Solomon Islands is due to be completed by next week, as the final part of New Zealand’s biggest single aid package.

The old runway on Nusatupe Island near Gizo in the Western Province has been upgraded, after falling into disrepair.

The project completes the US$20 million package that also saw an international runway on Munda and a 19-kilometre road laid from Munda to Noro.

The remote airstrip is an hour and a half by speedboat from Munda, passing by some idyllic islands and water with narrow passages through coral reefs. The largest of the Solomon Airlines domestic turbo-prop aircraft will soon be able to land here, close to Gizo - the capital of the province and the second biggest town in the country.

Janek Czastka is the site supervisor for the design company Aecom, and says the runway was in desperate need of repair.

“The surface here was very bad. Solomon Airlines were having a lot of trouble with blown tyres and damage to the aircraft and it was pretty much like a potholed road. And if you saw the surface for yourself you probably wouldn’t believe that aeroplanes were landing on it here on a regular basis. So with the amount of aggregate that we’re putting down and then with the weather-proofing with the chip seal on top it’s going to ensure that this airport will be serviceable for a good 25 years, hopefully longer.”

The trade commissioner for New Zealand, Michael Greenslade, says companies like Aecom and the construction company Downer needed to work through challenging logistics to get equipment here.

“To be honest it’s a real leap of faith and many of these companies when you talk to them about doing business up here, they often start the project without a firm contract in place and often start the contract without necessarily a proper cash flow system in place, simply because of how long it takes governments to put this in place. So many of the companies that are involved in the Pacific, I think are first and foremost involved because of their passion for the Pacific.”

But he says the assurance of being paid, through the New Zealand funding, is comforting, and the investments in the islands can really pay off.

“Some of these big projects have got reasonably good margins on them as well, and those margins have certainly helped a lot of companies during the last couple of years when the recession has hit pretty hard in New Zealand.”

The huge expanse of light-coloured aggregate is now being sealed with a layers of bitumen, and the long term sustainability of moving locals and tourists around these remote places is a step closer, with flights due to arrive on Monday 9 September.