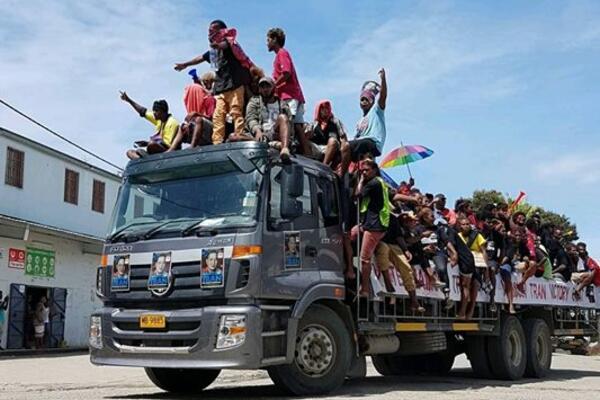 The organized float parade had imposed great risks to the members of the public and the partakers as well.
Share
Thursday, 04 April 2019 07:26 AM

The Royal Solomon Islands Police Force (RSIPF) will take stern action against anyone who organises or participates in any float parade on our roads either in Honiara or the provinces or on our seas to celebrate any winning candidate in the National General Election.

“We will not approve any requests from anyone who wants to organise any float parades in Honiara or in the provinces or at sea as the country awaits the results of the National Election today,” says RSIPF Commissioner Matthew Varley.

Commissioner Varley adds: “RSIPF has made this decision in the interests of public safety. We understand that traditionally people organise float parades to celebrate election winners but there is a serious risk that the situation can get out of control. Furthermore, some groups who were given approval to organise floats at the close of the campaign period failed to adhere to conditions that were attached to the approval of their requests.”

“Some groups failed to stick to the number of approved vehicles they said they were going to have in the float parade and they failed to monitor the safety of passengers in the vehicles, putting lives at risk. The situation was too dangerous and people ignored police advice to conduct floats safely. There was a total disregard for the traffic law. The RSIPF cannot allow this to happen again. We do not want to have any tragic accidents, injuries or even deaths,” says Commissioner Varley.

He adds: “This also goes for people in the provinces who may be planning to celebrate their winning candidate by conducting victory parades with OBMs at sea. Already we have seen an accident in an incident in the Central Province during which someone sustained serious injuries. We cannot allow this to happen again.”

“Furthermore, the RSIPF is asking those who will be celebrating their winning candidate to celebrate without alcohol and kwaso. Police will be monitoring celebrating groups to ensure no violence takes place. If the celebrations get out of hand then police will intervene,” Commissioner Varley emphasises.

He says, “We call on all supporters and candidates to accept the outcomes of the election as declared by SIEC. We want the peace which existed during polling day to continue into the counting period and declaration of results.”

“Let us refrain from spreading rumours of who has won the election before any declaration of the winning candidate is declared by officials of the Electoral Commission. Let us respect the rule of law. Let us not take the law into our own hands,” says Commissioner Varley

He adds: “Let me take this opportunity to thank all registered voters, supporters and candidates for the great behaviour shown during the polling today. From reports reaching the NGE Police Operation Centre (POC) in Honiara today, no major incidents were reported and the process went on peacefully. Let us continue this behaviour until the end of the process.”