No Tsunami Warning After Strong Quake 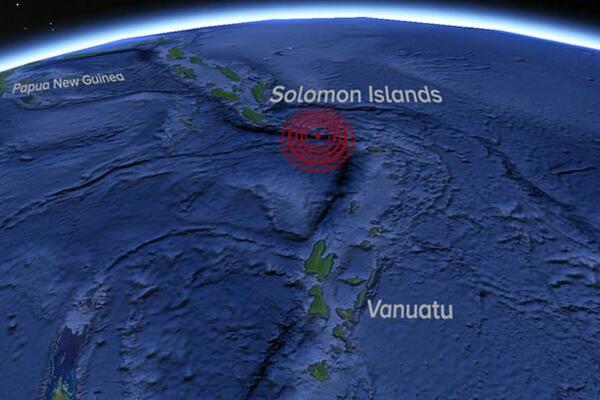 A 6.9-magnitude earthquake struck off the Solomon Islands this morning, but no tsunami warning was issued and no major damage was expected.

According to the US Geological Survey the quake hit at a depth of 19 kilometres), about 184 kilometres from Lata and 487 kilometres from the capital Honiara. It was followed a smaller 4.9-magnitude aftershock.

"Based on all available data there is no tsunami threat from this earthquake," the Pacific Tsunami Warning Centre said.

The Solomons are part of the "Ring of Fire", a zone of tectonic activity around the Pacific that is subject to frequent earthquakes and volcanic eruptions.

"This is one of the most active seismic regions in the world -- in the last three years we have had 30 plus earthquakes of over 6.0 magnitude," Geoscience Australia duty seismologist Marco Maldoni told AFP.

"No damage is expected from this quake. The main damage from these sorts of underwater events doesn't usually come from the earthquake itself, but the tsunami -- most seismic energy is released into the water."

Earlier this month, neighbouring Papua New Guinea was rattled by a 7.1 quake but a tsunami threat passed and there were no reports of major damage.

In 2007, the Solomons were hit by a tsunami after an 8.0-magnitude quake, leaving at least 10 people dead and thousands homeless after buildings were destroyed.