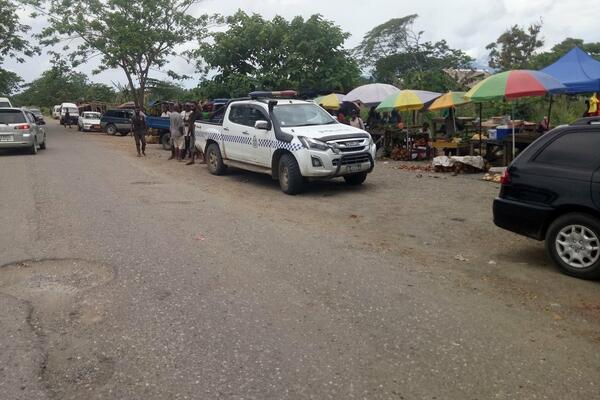 The Commissioner of Police Mostyn Mangau says that the country is still in the SOPE (State of Public Emergency) period and RSIPF has an important role to play.
Source: File: RSIPF
By News Desk
Share
Friday, 06 November 2020 09:41 AM

Commissioner of the Royal Solomon Island Police Force (RSIPF) Mostyn Mangau assures members of the public that there will be no protest by frontline officers over unpaid COVID-19 allowances as the Government is dealing with the issue.

It is understood frontline police officers were planning a sit in protest over failure by the government to pay $500 dollars in allowances for those working in the declared emergency zones.

The Opposition Leader Mathew Wale had earlier urged the government to explain why the Police Officers’ allowance payments were stopped without explanations.

“It is important that our hard-working officers are treated fairly, and they should be informed of any changes to allowance payments. It is also sad that the government fails to prioritise people who put their life on the line for the safety of our people," Wale said.

The Commissioner of Police Mostyn Mangau says that the country is still in the SOPE (State of Public Emergency) period and RSIPF has an important role to play.

“Like any other law enforcement agencies throughout the globe the police have a key role to play in supporting the implementation of public health measures to contain the COVID 19 outbreak and in preventing specific criminal activities arising from this context.

“I wish to thank all police officers who have been deployed on frontline duties in the Emergency Zones both in Honiara and at the western border with Papua New Guinea for their dedication and commitment as the RSIPF continues to assist other Government agencies fight the COVDID 19 pandemic within our shores,” says Commissioner Mangau.

He explains, “It is important to note that the Government’s COVID-19 Oversight Committee and a specially tasked committee spent a lot of time in considering the allowances for our officers, with the purpose of ensuring our staff are adequately and fairly remunerated during COVID-19 front line policing activities, whilst taking into consideration the country’s challenging economic environment.”

“I want to reassure the public and frontline police officers that the RSIPF Executive is in dialogue with the Office of the Prime Minister and the Ministry of Finance and Treasury over the issue of unpaid allowances. The Government has assured us that this issue has been given priority and the outstanding allowances will be paid in the coming week.”

“RSIPF will not support any sit in protest by any of its officers,” Commissioner Mangau emphasises.