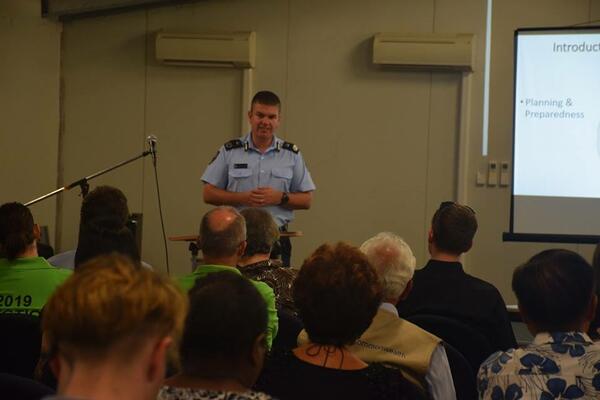 RSIPF Commissioner, Matthew Varley gave the assurance to members of the Diplomatic Corps, international and regional Election Observers and other stakeholders during a security briefing for the NGE held at the Rove Police Headquarters in Honiara last week.
Source: RSIPF
Share
Tuesday, 02 April 2019 07:20 AM

RSIPF Commissioner, Matthew Varley gave the assurance to members of the Diplomatic Corps, international and regional Election Observers and other stakeholders during a security briefing for the NGE held at the Rove Police Headquarters in Honiara last Friday.

“I can assure everyone that our intelligence assessments are strong and comprehensive and we are monitoring the situation right across the country. We cannot predict the future but we have plans in place for the unexpected,” Commissioner Varley told the meeting of more than 20 participants.

He explains: “From the intelligence gathered so far and from the intensive nation-wide NGE awareness program that RSIPF has been conducting over the past several weeks, the feedback received from the people especially in the communities, is that they want to see political change but not political violence.”

“There are reports of isolated incidences between supporters of candidates reaching the NGE Police Operation Centre (POC) at the Rove Police Headquarters in Honiara from the Provincial Forward Command Posts, but these are being resolved through community engagement and awareness talks and but most importantly through the assistance of chiefs and local leaders,” says Commissioner Varley.

He confirms: “The RSIPF has 1,763 officers including 250 officers from the Correctional Services of Solomon Islands (CSSI) deployed throughout the country for this operation. Plus our armed Police Response Team and Close Personal Protection (CPP) officers are strategically stationed at key locations around the nation.”

“We have a lot of assets dedicated to this NGE security operation including our two patrol boats located in the Western and Eastern ends of the country as well as our stabi-crafts and OBMs located throughout the provinces to assist when needed.”

“The RSIPF assets and capability has been boosted with the presence of six helicopters, one fixed wing aircraft and the HMAS Melvile under assistance from the Combined Task Group (CTG) from the Australian and New Zealand Defence Forces. This significant logistics and communication support is designed to support the RSIPF-led security operation,” says Commissioner Varley.

He adds: “After visiting my officers deployed to the provinces, especially in the Western and Malaita Provinces in the past few days, I am very impressed with their level of commitment to make sure the NGE 19 is safe and secure.”

“I ask you to trust us as we implement this 100 percent RSIPF led security operation. We are determined to make it a violence -free National General Election,” Commissioner Varley told the members of the Diplomatic Corp, Election Observers and stakeholders.

Commissioner Varley and Assistant Commissioner National Operations Mostyn Mangau also repeated the same messages during the Stret Tok Talkback Show on SIBC this afternoon. The Show will be shown on Telekom Television (TTV) in the next day or two as the RSIPF is using most of the different forms of media in the country to reassure people of what it is doing to ensure a safe and secure NGE on Wednesday this week.