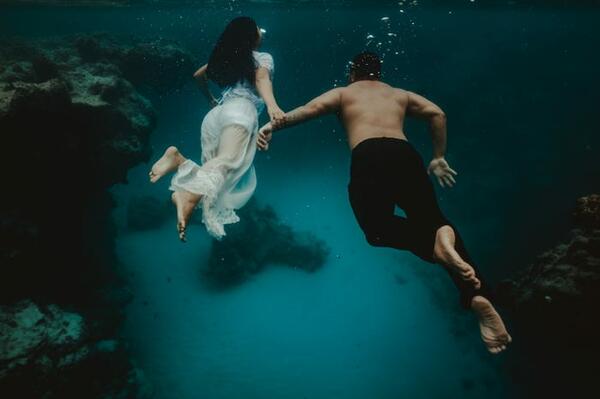 “Every time there is a wedding, couples want to be photographed on the beach. From the beach I decided to go under the water,” she said.
Source: Salt and Shores Photography/Junebug Weddings
Share
Thursday, 13 January 2022 13:52 PM

A Ni-Van photographer has snapped up the world’s attention with an underwater wedding photo taken in Vanuatu.

The photographer, Valerie Fernandez, says she wants to tell the world about Vanuatu through her photographs, particularly underwater photography of couples.

And tell the world she has, with feature after feature of the photo in notable magazines and websites such as Rangefinder, Huffington Post, Dirty Boots, Together Journal and Messy Hair.

Earlier in 2019, she was selected as one of the best 50 photographers in the Junebug 2019 Best of the Best Destination, and again in 2021 among the 50 best photographers of Junebug Best of Best Weddings.

Most recently Mrs. Fernandez was declared a Rising Star Nominee in a prestigious photographers’ award in the United States.

“My collections are more than just photos, through them I want to promote Vanuatu throughout the world,” she shared.

“They are not just photos, people who want to get married will want to come to Vanuatu. My photos got a lot prestige and also they have been published by a lot of newspapers and magazines.”

Fernandez said in 2019, she received a call from a couple in United Kingdom who were interested to be photographed inside Blue Cave on Tanna because they saw one of her photos of a couple that was taken there.

“They came to Vanuatu and we went to Tanna to take their photos,” she said. Mrs. Fernandez said Blue Cave photo is so far viewed by over 18,000 people around the globe.

She wants to put Vanuatu on the map for people picking destinations for their wedding and honeymooners.

Fernandez started taking photos in 2014 and she became a professional photographer in 2017, before venturing into underwater photography for couples in 2020.

“Every time there is a wedding, couples want to be photographed on the beach. From the beach I decided to go under the water,” she said.

Fernandez says if borders reopen, she plans to do more underwater wedding photography in rural communities so they can financially benefit from the package, through transport and accommodation.