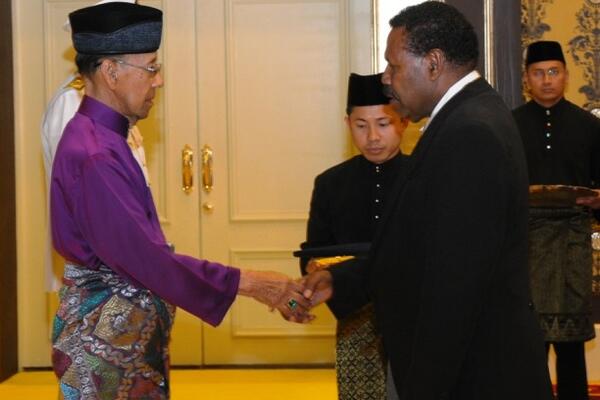 Solomon Islands High Commissioner accredited to Malaysia, Victor Ngele has finally presented his letter of Credence to the King of Malaysia, His Majesty, Yang di-Pertuan Agong.

The official presentation now made him to be the first accredited Solomon Islands High Commissioner to Malaysia.

Upon arrival at the Palace, H.E. Mr Ngele was received and led to the Dias by the Chief of Protocol and the Military ADC to receive the General Salute from the Guard-of-Honor.

He was then led by the Royal Grand Chamberlain to the Throne Room for presentation of the letter of credence and to the Audience Room for a brief audience with Their Majesties. H.E. Mr Ngele was accompanied by his wife, Madam Ngele for the ceremony and audience.

He stated that Malaysia and the Solomon Islands relationship has developed and matured since the establishment of diplomatic relation in 1988. He affirmed that this relationship is based on mutual interests and respect for ideals and principles of peace, freedom, democracy, respect for fundamental human values and sovereignty.

He also expressed the business engagements between the peoples of Malaysia and the Solomon Islands and encouraged diversification of Foreign Direct Investment into other sectors such as tourism, agriculture, fisheries, finance, mining and others.
In response, His Majesty the Yang di-Pertuan Agong reciprocated and conveyed greetings and best wishes to His Excellency Sir Frank Ofagioro Kabui, the Government and people of Solomon Islands. He further affirmed peace progress and prosperity in the forthcoming years for Solomon Islands.

His Majesty said Malaysia is pleased with the establishment of the High Commission of Solomon Islands in Kuala Lumpur, Malaysia, and affirmed that it bodes well with the two countries commitment to elevate and enhance current bilateral relations.

“Malaysia is confident that the establishment of the Solomon Islands Mission along with the High Commissioners commitment will pave the way to closer links between the two governments, which will lead to expansion of trade and cooperation for the benefit of Malaysian and Solomon Islands,” His Majesty said.

He further affirmed Malaysia’s continued support towards the development of Solomon Islands, through various initiatives, especially the Malaysian Technical Cooperation Programme (MTCP). This programme since 1981 until May 2013 had provided fully funded short term training courses for 121 Solomon Islands participants.

His Majesty assured the newly accredited High Commissioner of Solomon Islands of the Government of Malaysia fullest cooperation and support in the discharge of his duty.

His Excellency Mr Ngele was the first out of the seven High Commissioners and Ambassadors, who presented their letters of credence to the King in the afternoon of Tuesday, 2nd July, 2013.