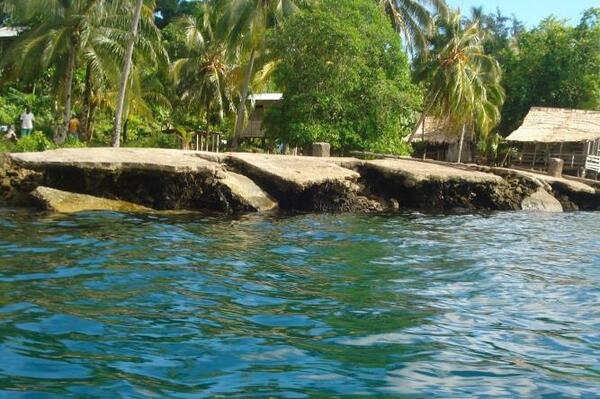 The Ngasini wharf in Marovo, Western Province before receiving a facelift, to start this week.
Source: Asian Development Bank
Share
Monday, 02 June 2014 07:55 AM

The wharf is one of four wharves and a landing ramp to be improved under the second phase of the Domestic Maritime Support Project, which is financed by the Solomon Islands Government, the Asian Development Bank (ADB), the Australian Government, and the New Zealand Aid Programme.

The project is constructing rural wharves to improve safety and access to economic opportunities. The new wharves are designed to be less vulnerable to climate change and natural hazards.

The upgrading of Ngasini Wharf will involve demolishing the existing wharf and part of the access causeway. A new reinforced concrete wharf will be constructed and a new coral filled causeway will be built using salvaged material.

The new wharf on Vangunu will boost access to markets and social services. As Ngasini Wharf is being restored to allow large ship access, it will provide opportunities for increased private sector investment, providing employment and enhancing economic activities. For example, it will help boost copra production and encourage the growth of fisheries and tourism.

Phase one of the Domestic Maritime Support Project has already rebuilt five wharves and two landing ramps in five Solomon Islands provinces. The project also established a franchise shipping scheme to support remote communities. The improved shipping services and new wharves and jetties are reducing barriers to market access and are promoting the growth of rural production. The franchise shipping scheme is allowing private sector operators to deliver shipping services to destinations that would not be commercially viable.

The upgraded wharf is expected to be open in August this year.

ADB, based in Manila, is dedicated to reducing poverty in Asia and the Pacific through inclusive economic growth, environmentally sustainable growth, and regional integration. Established in 1966, it is owned by 67 members – 48 from the region. In 2013, ADB assistance totaled $21.0 billion, including cofinancing of $6.6 billion.