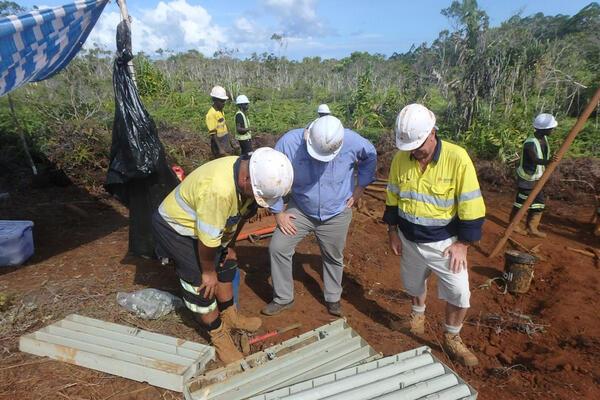 Axiom had its foreign investment licence cancelled by the Solomon Islands government in October this year and has been told that its expatriate workers were no longer able to stay in the country.
Source: Supplied
Share
Wednesday, 04 December 2019 10:25 AM

The Australian newspaper reports that the Prime Minister’s chief of staff (prior to his appointment in October 2016) had sought payments from Axiom to smooth over problems with the government at the time.

Axiom mining chief Ryan Mount said Robson Djokovic, who is Mr Sogavare’s nephew and has a criminal record in Australia, had sought AUD$700,000 “consultancy” through a Fijian lawyer to allow the company to hold on to its Isabel Nickel project.

“When we looked at the company records, it was half-owned by Robson Djokovic,” Mr Mount said.

He said he refused to pay, and the ASX-listed company was being forced out of the country in favour of a Chinese company that caused the Solomon Islands biggest environmental disaster.

Mr Mount has pleaded for Australian government assistance, telling senior advisers to Scott Morrison and Foreign Minister Marise Payne that the company, which has 8000 shareholders, was being denied due process by the Solomon Islands government.

Amid moves to strengthen relations with Pacific governments, Mr Mount said he was told by a senior official at the Australian high commission in Honiara that it was “time to pack your bags” and leave the country.

Mr Djokovic, an Australian citizen, told The Australian via text message that the allegations against him were “a smear”.

He said his criminal convictions for burglary, fraud and drug offences “are no longer relevant but have been used for political convenience” by Mr Mount and others seeking to undermine him.

Wilson Rano, a well-known lawyer in Solomon Islands, posted on social media that he was in fact the person referred to in the article by The Australian.

“I recall having a meeting with Ryan Mount, and Mr Stratton (an Australian Lawyer) representing Axiom Mining Company Limited at Nadi, Fiji in 2016. This was after Axiom KB Ltd was licking its wounds from the SMM v Axiom Case which our Court of Appeal dismissed both Axiom’s Licence and SMM’s licence and found that the Commissioner of Lands with the help of Axiom KB Ltd and Ryan Mount illegally registered a lease over Takata/Kolosori tenement,” Rano explained.

He said that the meeting in Fiji was purposely to come up with a legislation that could give clarity to the whole mining process and help secure the San Jorge and Takata Tenements for Axiom Mining Co Ltd.

“It is an idea which Mr Mount was championing in light of his position that the Mines and Minerals Act simply failed to recognize investors like Axiom and how Axiom is the only company capable of properly mine San Jorge and Takata.

“As a professional, my position has always been that I would be willing to do all legal means possible to do the work in consultation with Mr Stanton and Axiom if Axiom is prepared to put its money where its mouth is. I drafted a consulting agreement between Axiom Mining Co Ltd and myself and stated that my consulting fees is AUD$700,000 and payable on instalments upon achievement of each stages of the proposed legislation.”

Rano says that having received instructions from Axiom he sought the assistance of Mr. Djokovic, at the time was a freelance consultant and was not yet employed by the Solomon Islands Government. Rano says that by the end of October 2016, Mr Djokovic joined the Government as Chief of Staff and advised that he could no longer be involved.

“The only connection between Mr Djokovic and Echelon Consulting Ltd is me. It is no secret that Mr Djokovic and I have been business partners for many years which on his part has been disclosed in full to the Leadership Code Commission.”

Axiom had its foreign investment licence cancelled by the Solomon Islands government in October this year and has been told that its expatriate workers were no longer able to stay in the country.

Mr. Mount continues to argue that the country’s pro-China Minister for Mines, Bradley Tovosia — a key figure in the campaign to sever diplomatic relations with Taiwan — was a leading figure in moves to deny the company an export permit.

The move — a month after the Solomons switched diplomatic relations from Taiwan to China — follows the denial of an export permit to Axiom and the assignment of one of its prospective tenements to the Hong Kong-based Bintan Mining.

Bintan sparked a massive Australian government-funded clean-up earlier this year when one of its bauxite ships spilled 80 tonnes of heavy fuel oil on an environmentally sensitive reef on Rennell Island, South of the Solomon Islands.