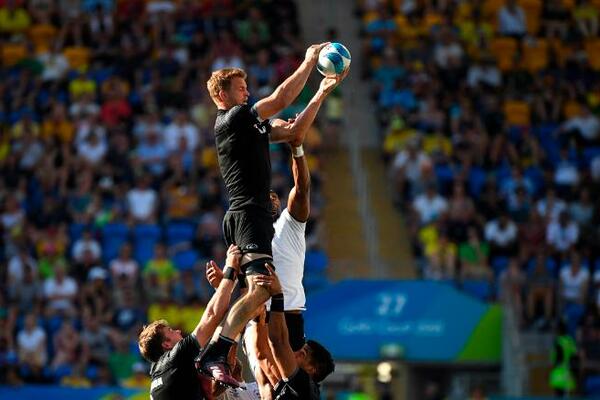 The All Black Sevens have now claimed five out of six gold medals since the event began back in the 1998 Games.
Source: edition.cnn.com
Share
Monday, 16 April 2018 07:00 AM

New Zealand cleaned up in the rugby sevens Sunday, with their men's team defeating Fiji 14-0 in the Commonwealth Games' final, after the women's team had beaten hosts Australia earlier.

The All Black Sevens have now claimed five out of six gold medals since the event began back in the 1998 Games. Their only loss was against South Africa who won gold four years ago in Glasgow.

New Zealand started the game in blistering fashion, Etene Nanai-Setro producing the first try of the game, with a powerful surge to break through the Fijian line.

The 18-year-old Nanai-Setro, who is of Fijian descent, produced a superb performance showing why so many have him pegged as a player with a big future.
Regan Ware then created a second try for New Zealand with some individual magic to put them 14-0 ahead.

Fiji have lit up this sevens tournament with some dazzling displays, notably with wins over Wales and reigning champions South Africa in the semifinals.

But with the game running away from this big and physcial Fiji side, tempers started to flare and Sevuloni Mocenecagi and New Zealand's Sam Dixon were involved in a heated exchange.

Mocenecagi then flew into Dixon with a high tackle, leaving the New Zealander in a crumpled heap on the ground and in need of medical attention.

The Commonwealth Games is supposed to be the "Friendly Games" but this was anything but. The New Zealand bench was up and the players were furious.

However, the referee adjudged that Mocenecagi had first made contact with Dixon's chest and produced a yellow rather than a red card.

With Mocenecagi languishing in the sin bin, New Zealand looked to have converted a third try with just seconds remaining in the first half, but after reviewing the incident the video ref decided that Ware had spilled the ball.

Mocenecagi was still off the field when play resumed but you wouldn't have noticed as Fiji started the second half on top and only a brilliant saving tackle from All Black captain Scott Curry prevented the Fijians from getting a try back.

"Scott Curry's tackle on the far side [to stop a Fiji try] was unbelievable. He made a similar one yesterday [Saturday]. Your defense always shows how tight you are as a group and I think that shone through tonight," New Zealand coach Clark Laidlaw told New Zealand.

The tackle would set the tone for the second half with New Zealand putting on a defensive masterclass.

"It's desire. We've spent a lot of time working off the field as a group, getting close. The last couple of weeks has brought us even closer," Laidlaw said.

"That's probably the part I'm even more proud of, how close we've got as a group, and it showed in the defense."

In possession New Zealand used every tactic available to run down the clock, which was not always popular with the Australian crowd but was effective game management.

And every time Fiji looked set to break the line and race through to score a try, there would be a New Zealander to make the tackle.