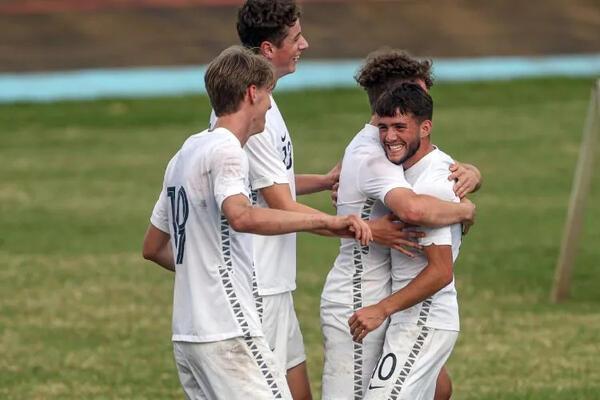 New Zealand have secured top spot in Group A at the OFC U-19 Championship 2022 after a comfortable 6-0 win over Solomon Islands at Stade Fautaua in Papeete, Tahiti.

A brace apiece from Kian Donkers and Adam Supyk ensured New Zealand will receive a favourable draw in the quarter-finals, while the Solomon Islands are also into the final eight as runners-up.

While both teams were already assured of a place in the knockout phase before kick-off each were hoping to claim top spot and a quarter-final clash with one of the best third-placed nations.

With that in mind, the Solomon Islands looked to press New Zealand early on but had goalkeeper Junior Petua to thank for keeping the game scoreless after he denied Jay Herdman and Donkers.

However, Petua could do little to stop New Zealand’s opener. A slip from centre-back Wilfred Mani allowed Donkers to stride through and finish with ease for 1-0.

The Solomon Islands continued to threaten, with Billy Afi heading over a golden opportunity which was punished immediately at the other end.

Substitute defender Solomon Sale had been on the pitch for less than a minute before tripping Noah Karunaratne in the box and Donkers slotted the penalty away to give New Zealand a 2-0 half-time lead.

A last-ditch tackle from Marco Lorenz denied Junior Rocky a chance to pull one back for the Solomon Islands early in the second period. New Zealand took advantage almost immediately, Supyk smashing home at the near-post to finish a slick team move.

The left-back turned provider for the fourth, crossing for his opposite full-back Everton O’Leary to roll into an empty net as New Zealand took complete control.

Supyk continued to terrorise the Solomon Islands defence with his stepover and finish stretching the advantage to 5-0.

Fin Conchie added a sixth late on to put the final gloss on New Zealand’s performance.

New Zealand will now face one of the third-placed teams from either Group B or C in the quarters on Saturday, September 17 while the Solomon Islands will take on the winners of Group C on Sunday, September 18.