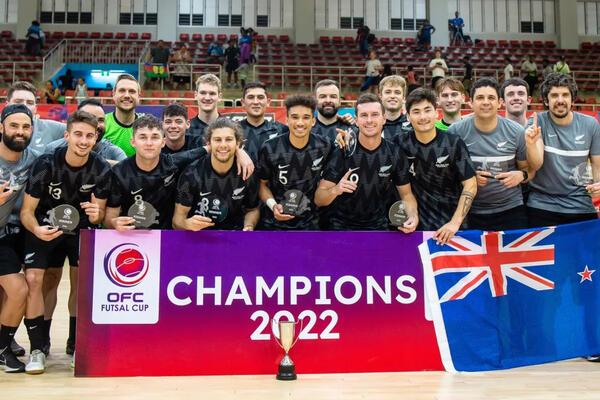 New Zealand have won the OFC Futsal Cup 2022 after a brilliant performance in Sunday’s Cup final, which saw them beat Solomon Islands 6-2 at the Vodafone Arena in Suva, Fiji.

Rahan Ali did much of the damage for New Zealand, netting three goals in the decider, including two in the space of two minutes.

The Futsal Whites got off to a flying start, with Jordan Ditford flicking the ball up and powering a half volley home, while Charlie Ata was called into action on a number of occasions, with some impressive saves ensuring the Futsal Whites didn’t add to their tally.

Marlon Sia and Ali then traded goals, before Ethan Martin gave New Zealand a 3-1 lead at the break.

Ali’s quickfire double, in between Benjmin Mana’s goal, put New Zealand well in control midway through the second period, before veteran Stephen Ashby-Peckham slotted a sixth to put the result beyond doubt.

The Kurukuru’s cause wasn’t helped late on by the loss of Jeffery Bule and Sia to red cards.

Solomon Islands has dominated the Futsal code in Oceania, having won the 2008 Oceanian Futsal Championship, and successfully defended their title in 2009, beating Fiji 8–1 in the final, and then again in 2010 and 2011.

After failing to win in 2013 and not competing in 2014, they would win their record-tying fifth OFC Futsal Championship in 2016.

The Solomon Islands national futsal team currently holds the world record for the fastest ever goal scored in an official futsal match. It was set by Kurukuru captain Elliot Ragomo, who scored against New Caledonia three seconds into the game in July 2009.