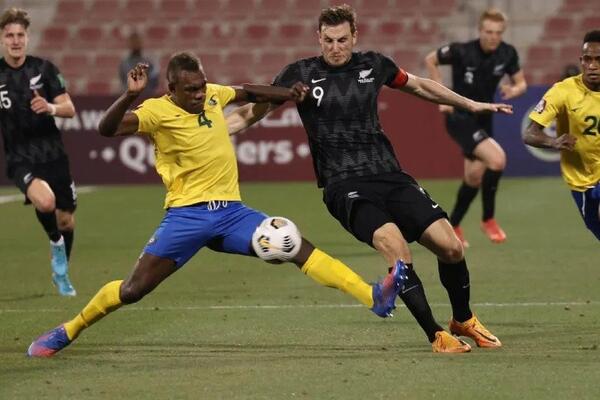 It was a brave performance from the young Solomon Islanders, but New Zealand proved too strong and had too much arsenal going forward. A Bill Tuiloma brace and goals from Joe Bell, Chris Wood and Matt Garbett secured a 5-0 win over Solomon Islands at the Grand Hamad Stadium in Doha, Qatar.

The result means New Zealand now advance to the next stage of World Cup qualifying, an intercontinental play-off, also set to be played in Qatar, in June.

Solomon Islands head coach Felipe Vega-Arango was boosted pre-game by the availability of tournament joint top-scorer Raphael Lea’i after an injury concern. However, William Komasi and Javin Wae dropped out from the semi, replaced by Leon Kofana and Molis Junior Gagame in their only changes.

Both teams seemed intent on attacking from the start, with Joses Nawo stinging the hands of New Zealand goalkeeper Stefan Marinovic early on. Rogerson and Wood then tested Solomon Islands stopper Phillip Mango before the deadlock was eventually broken 23 minutes in.

It was Bill Tuiloma, so dangerous in the air throughout the competition, who headed New Zealand into the lead. The defender rose highest at the back post to power a Joe Bell corner beyond Mango for the opening goal.

Set-pieces continued to prove a problem for Solomon Islands throughout, Nando Pijnaker seeing his scrappy effort after a De Vries corner ruled out for a foul in the build-up but the All Whites stretched their advantage moments later.

Centre-back Smith delivered a sweeping pass to Payne on the right who then provided an inch-perfect cross for Wood to nod home his fifth goal of the tournament, ensuring New Zealand went into the break two goals up and he finished as the competition’s top-scorer.

Payne and Wood combined again shortly after the break, forcing a good save from Mango. However, the score was soon 3-0, Bell scoring straight from the resultant corner, his wicked curling delivery deceiving Mango in the Solomons goal.

Solomon Islands attempted to respond immediately, Lea’i showing why he has been one of the stars of the tournament. The Solomon Islands attacker skipped past both Smith and Tuiloma before his effort was well blocked by Marinovic to maintain New Zealand’s clean sheet.

New Zealand thought they had made it 4-0 when Wood tucked away a Rogerson cross. However, after a VAR review, Rogerson was found to be offside in the build-up and referee Nawaf Abdulla Shukralla ruled the goal out – the first time a goal has been ruled out by VAR in an OFC competition.

The All Whites were not to be denied a few minutes later, Tuiloma making it 4-0 with a near replica of his earlier goal as corners continued to trouble the Solomon Islands.

Wood and McCowatt had chances to stretch the lead whilst Lea’i continued to threaten for Solomon Islands, his pace in behind keeping the New Zealand defenders and Marinovic on their toes.

But Garbett’s low driven finish in the final minute put gloss on the scoreline as New Zealand saw out a 5-0 victory to win the Oceania Qualifiers.

The All Whites will now face the fourth-place team from the CONCACAF Third Round in an intercontinental play-off in June with the winner earning a place at the FIFA World Cup Qatar 2022. Meanwhile, Solomon Islands can take heart from an impressive and entertaining campaign.