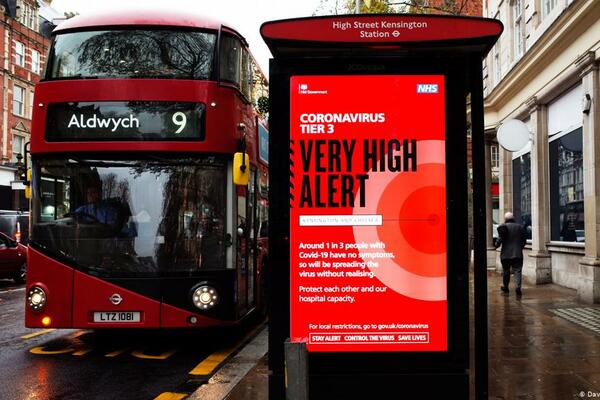 The U.K. government had previously said the mutated variant appears to be as much as 70% more transmissible than other circulating strains.
Source: DW.com
By Corinne Gretler
Share
Monday, 28 December 2020 11:28 AM

The mutated coronavirus strain that’s been spreading in the U.K. appears to be more contagious and will likely lead to higher levels of hospitalizations and deaths next year, a new study showed.

The variant is 56% more transmissible than other strains, according to the study by the Centre for Mathematical Modelling of Infectious Diseases at the London School of Hygiene and Tropical Medicine. There’s no clear evidence that it results in more or less severe disease.

The U.K. government had previously said the mutated variant appears to be as much as 70% more transmissible than other circulating strains. Additionally, it has almost two dozen mutations that may affect proteins made by the coronavirus, Patrick Vallance, the U.K.’s chief scientific adviser, said on Dec. 19.

That has raised concern that tests, treatments and vaccines that just started rolling out might be less effective, though Europe’s health regulator said the variant probably isn’t different enough from earlier ones to elude Pfizer Inc. and BioNTech SE’s shot. Countries including Australia, Denmark and Singapore have also discovered the strain.

Measures like England’s national lockdown in November are unlikely to reduce the reproduction number -- the new infections estimated to stem from a single case -- to less than 1 unless schools and universities are also closed, the report said. It also said vaccine rollouts may need to be accelerated to contain its spread, to a rate of 2 million people a week from the current pace of 200,000.