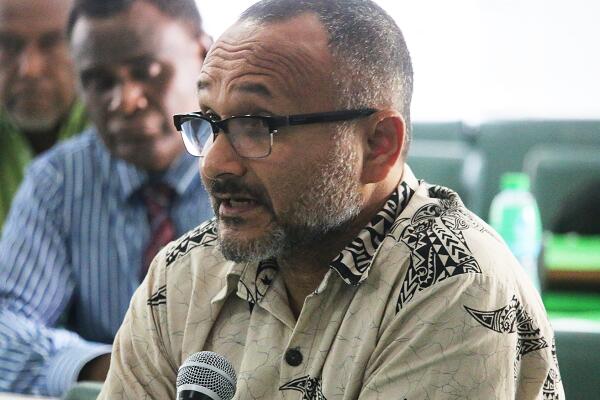 The Opposition Leader said the government should not rush in talking about living with COVID yet.
Source: File: Solomon Star
Share
Monday, 07 February 2022 15:31 PM

Opposition Leader Hon Matthew Wale said the government’s new policy direction to focus on the new reality of ‘living with and emerging successfully’ from the pandemic must be carefully thought out.

Hon Wale cautioned the government in response to the Prime Minister’s announcement of the government’s new policy direction during his nationwide address on Sunday.

“There is a time for everything. It seems premature to be talking about living with covid-19 at this stage,” he said.

The Prime Minister in his address said ‘the government Caucus and the National Cabinet will deliberate on the new Policy direction this week. Once approved, the new Policy will guide the preparation of the 2022 budget among other things.'

The Opposition Leader said the government should not rush in talking about living with COVID yet.

“There will come a time when we will reach that stage but it is too early for that as our vaccination rate is still too low to pursue that approach,” he said.

Hon Wale said any policy direction now should be focused on vaccinating at least 95% of the population with the hope of achieving herd immunity, and urgently address the current health crisis.

He said vaccination must also include those 5 years and older.

“Any policy approach surely needs an epidemiological scientific direction to guide it,” he said.

The Opposition Leader said the government’s new policy should be based on epidemiology.

“My greatest disappointment with government responses so far is the fact that it appears there is a general neglect of sound epidemiology driving it,” he said.

Hon. Wale further calls on the Prime Minister to lead from the front, and not delegate his responsibilities at this time of emergency.

“Infections are out of control, government response chaotic, and many of our people are dying. How bad should the situation get before the Prime Minister takes his responsibility to lead seriously?” Hon Wale asks.