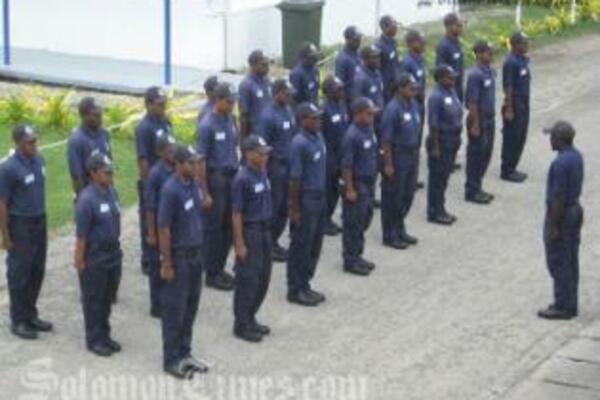 Director of Police Academy Inspector Anika Nausi said today that the program, which starts in August 2009, has progressed really well.

"There are five females candidates out of 27 recruits. They have all gone through physical and academic exercises for the past 11 weeks," says Anika. "It is a very different experience for the recruits who have undergone intensive training and this present its own challenges for them."

Inspector Nausi said, the training designed to test and challenge the recruits' personal values, their commitment and their ability to embrace new ideas and apply newly acquired policing skills.

"Some of the exercises include policing duties, investigations techniques, police laws, equipment handling and marching drills, which help in still a sense of team work and discipline," she said.

The recruits recently completed a week of practical assignment on compiling and completing a case file or docket, an essential component of general policing.

"They are now preparing for their third Instructors Exam which will include two modules of offences against a person and against property," Inspector Nausi said.

In the final weeks of the recruit program the recruits normally undergo four Instructor Exams which are designed to prepare and equip them with the necessary policing skills for the next phase of their training.

Once the Instructors' Exams are satisfactorily completed, and the recruits graduate on 27 November, they will then be posted to different stations within Honiara as Probationary Constables.

Inspector Nausi said she was optimistic about the success of the recruits.
"There are still many challenges ahead and it is not going to be easy for them but Police Academy staffs have witnessed significant improvements. We are confident that these recruits are capable of serving their community as fine Police officers," she said.

The next group of RSIPF recruits is due to commence training at the Police Academy in early 2010.