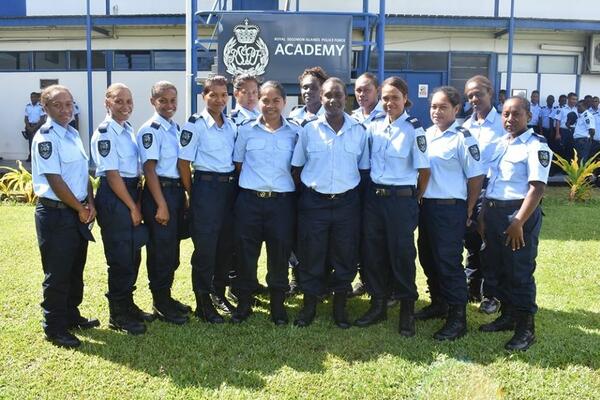 The Royal Solomon Islands Police (RSIPF) have a total of 69 new recruits, 13 of whom are female from Honiara and throughout the provinces.
Source: RSIPF Media
Share
Monday, 16 December 2019 07:21 AM

The Royal Solomon Islands Police Force (RSIPF) second recruit group for 2019 has started their training at the Police Academy at the Rove Police Headquarters in Honiara today with a call on them to serve the government and people of the country with integrity, professionalism and respect.

There are a total of 69 new recruits from Honiara and throughout the provinces including 13 female candidates.

Before officially opening the 26 weeks training program, Acting Commissioner Mostyn Mangau congratulated the new recruits for their selection to join the RSIPF.

“I understand that you have gone through rigorous processes during the recruitment process, in order for you to be get selected. In that respect, each and every one of you who are here today, should be proud of yourselves as you are the fortunate ones amongst many others who have also gone through the same processes, but were unable to make it this far. So today is indeed a memorable day for each of you as you begin your policing journey.”

“I would like to urge each of you to make use of the golden opportunity that you have been given, to be selected as a police recruit, and do ensure this opportunity does not slip off from you. I want you to bear in mind that the RSIPF should not be seen or treated as an organization for seeking employment. I hope that kind of mentality is not what drives you to join the RSIPF. Thus I expect each of you to be someone who has decided to join the RSIPF with a vision and positive mentality with a common purpose, and that is to serve the government and the people of our beloved country with integrity,” Acting Commissioner Mangau told the new recruits.

“I have no doubt that your families and communities have supported you and are proud of you becoming a police officer. To reciprocate that support, you have to display your roles and responsibilities as police officers by serving your communities, government, and the people of Solomon Islands with professionalism and respect, after completing your training at the Police Academy.”

Acting Commissioner Mangau warned the recruits that their training course is intensive and challenging and it will run for twenty-six weeks.

“I encourage you to always:
• strive for the best;
• commit yourselves to learning;
• behave in a professional manner that reflects well on the integrity of the RSIPF;
• adhere to the Academy Standing Orders and Training Policies
• work together as a team, as police work is not a ‘SOLO’ show, Police work is all about Team Work, and
• NEVER GIVE UP.”