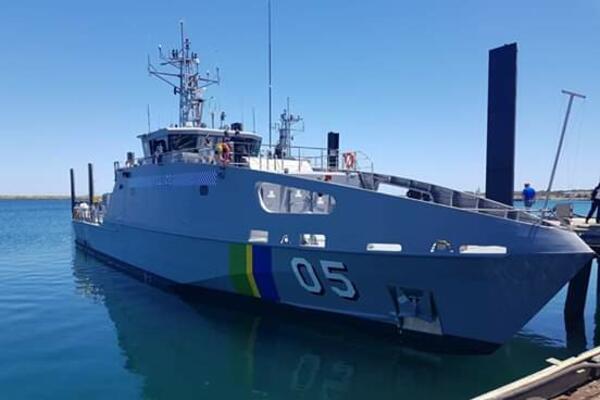 The Royal Solomon Islands Police Force (RSIPF) and the people of the country will greatly benefit from the new Australian gifted patrol boat.

The new patrol boat 05 is called the RSIPV Gizo.

“The new police patrol boat is a Guardian class Pacific Patrol Boat which is bigger than our existing patrol boat,” explains DC Mangau.

“The new Guardian Class Pacific Patrol Boat has a length of 39.5 metres, and a complement of 23 crew members. It is powered by two 5,400hp diesel engines, the vessel can travel 3,000 nautical miles at minimal speed. This new boat is purposely to conduct maritime surveillance and enforcement operations like fighting illegal fishing, search and rescue for distress boats, VIP escorts and other border operations,” says DC Mangau.

“On behalf of the RSIPF, I would like to thank the government and people of Australia for the gift of the new patrol boat. I would also like to thank the Australian Defence Program and Australian High Commission to Solomon Islands for making possible arrangements for the official handing over ceremony held in Perth, Western Australia last week.”

RSIPF Maritime officers, who are currently being trained on board the RSIPV Gizo in Perth, will sail the patrol boat to Solomon Islands and expected to arrive in Honiara by the middle of next month.

A formal welcome ceremony is being planned for the arrival of the new patrol boat to its new home, the Aola Patrol Base in Honiara.