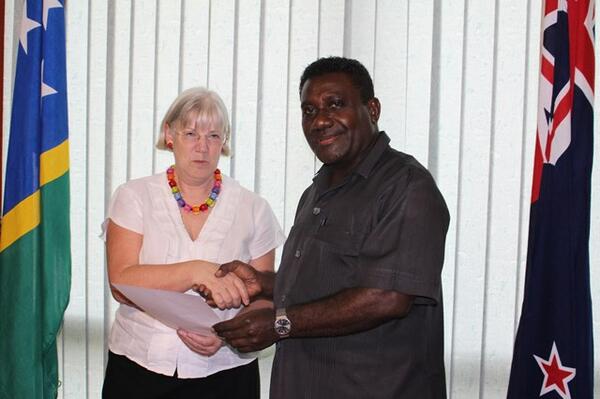 Mr. Lilo said he appreciated the wealth and knowledge Ms. Crawshaw has of Solomon Islands as she has served as deputy high commissioner in the country in the past.
Source: Photo supplied
Share
Thursday, 24 April 2014 08:35 AM

During the occasion, Prime Minister Lilo thanked Ms. Crawshaw for accepting to serve in the Solomon Islands.

Mr. Lilo said he appreciated the wealth and knowledge Ms. Crawshaw has of Solomon Islands as she has served as deputy high commissioner in the country in the past.

“Welcome to the Solomon Islands and I hope you will continue the good work in strengthening the relationship between the two countries,” the Prime Minister said.

Mr. Lilo said Solomon Islands has gone through challenging times following the recent floods and the Prime Minister thanked New Zealand for their assistance in dispatching their experts to help in rehabilitation and rebuilding important infrastructures in the country.

“We look forward in working closely with your office in these challenging times,” Mr. Lilo said.

Meanwhile, Ms. Crawshaw said she was pleased to be back serving in the Solomon Islands.

The New Zealand high commissioner reassured the Prime Minister that New Zealand will continue to support Solomon Islands in economic development as well as other important sectors.

She added that some of the programs the New Zealand government would like to see progress further are the political party integrity bill, land reform and the airport management reform to name a few.

Ms Crawshaw served as deputy high commissioner to Solomon Islands from 1999 to 2001 and was most recently New Zealand’s High Commissioner to Papua New Guinea.