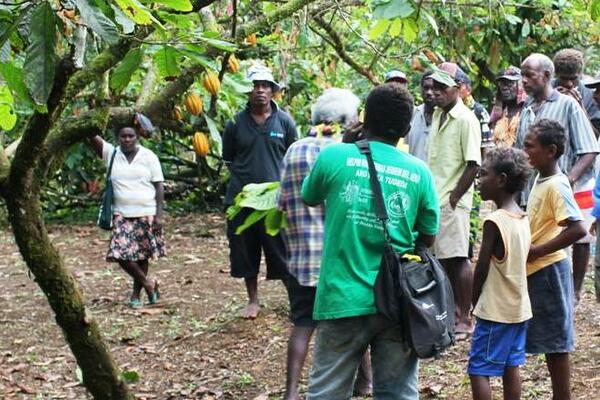 At the moment Solomon Islands produces around 4,000-6,000 metric tonnes of cocoa annually, but the Ministry believes the new strategy will help bring the amount to 20,000 over the next seven years.
Source: Photo supplied
Share
Friday, 26 April 2013 10:24 AM

Solomon Islands aims to produce 20,000 metric tonnes of cocoa by 2020 under a new Cocoa Policy to be launch by the government on Friday 26th April 2013 at the Honiara Hotel.

The Minister of Agriculture and Livestock, Hon David Tome will launch the policy and says it would help increase the incomes 20,000 cocoa growing households.

At the moment Solomon Islands produces around 4,000-6,000 metric tonnes of cocoa annually, but the Ministry believes the new strategy will help bring the amount to 20,000 over the next seven years.

According to Dr John Konam, an AusAID funded cocoa adviser to the Ministry, cocoa trees in Solomon Islands are only producing 25 per cent of their yield potential.

“Many of the 23 million cocoa trees in this country are more than 30 years old. They are neglected, over-grown and are not producing their yield potential of 23 million kilograms of dry beans per year. In addition, cocoa farmers lack basic management skills and are relying on poor material”.

“The genetic material used throughout the country is also highly variable. We estimate that 70 per cent of the national genetic material in cocoa has been lost since 2000. Seedlings are currently produced from open pollinated sources”.

But the barriers to increasing production can easily be addressed said Dr Konam.

“The focus of the strategy is rehabilitating cocoa crops, planting improved crop varieties with higher yields and developing better market linkages, so that farmers are better managing and benefiting from their cocoa”.

“A key focus will be training farmers on the importance of integrated pest and disease management in cocoa gardens, which was first introduced by the AusAID funded CLIP program. This system involves targeted pruning, weeding and tree management practices that can help farmers to vastly improve yields from their cocoa trees.”

“We also need to bring plantations back in to production that were abandoned during the tensions and increase access to credit for the industry”.