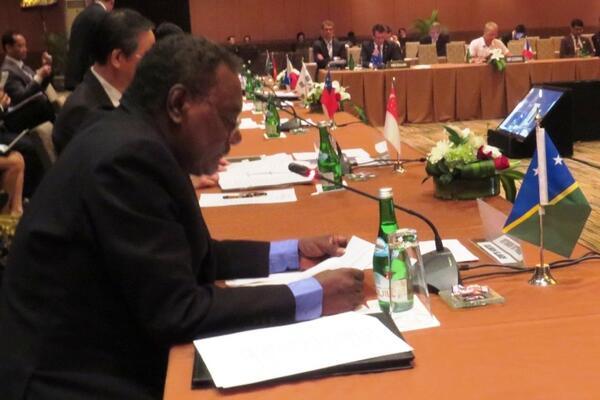 Minister of Commerce, Industries, Labour and Immigration Elijah Muala recently made the announcement at the 5th Regional Ministerial Conference on People Smuggling, Trafficking in Persons and other related Transnational Crimes in Bali, Indonesia on April 2.

The new Immigration Act 2012 provides a comprehensive coverage of Immigration issues to meet the country’s specific needs and to provide the platform for a range of technological innovations which will enable national authorities to keep pace with the rapid global changes to immigration systems and requirements.

Minister Muala explained that the Immigration Act supports economic development objectives by enabling a rapid response to labor market needs and supporting constructive foreign investment initiatives and it has provisions which criminalizes offences relating to People Smuggling and Trafficking in Persons.

“By having the new Immigration Act in place, Solomon Islands now has the necessary laws to deal with issues relating to People Smuggling and Human Trafficking,” Minister Muala said.

Director of Immigration Jeffery Deve also informed the conference that although the new Immigration Act and the new Passport Act is in place, the two new set of laws are yet to be implemented.

“There are other things that Solomon Islands need to have such as human resources, capacity building to ensure that officers are trained to handle victims of people smuggling and trafficking in persons as well as necessary infrastructures such as safe houses to detain the suspects as well as to deal with the victims,” Mr Deve explained.

The Bali Process which Solomon Islands is a member provides the avenue for member countries to share information on irregular movement of people, learn best practices from each other and work together to combat people smuggling, trafficking in persons for illegal activities such as prostitution and other related transnational crimes such as trafficking of drugs and money laundering.

The Bali Process meetings is important for Solomon Islands as member countries agreed on non-binding commitments to work together to combat people smuggling and trafficking in persons and related transnational crimes which pose great risk to the country’s national security.

Minister Muala is accompanied by the Director for Immigration Jeffery Deve and Cornelius Walegerea, Assistant Secretary, Ministry of Foreign Affairs and External Trade.