New Houses for the RSIPF, First of Many 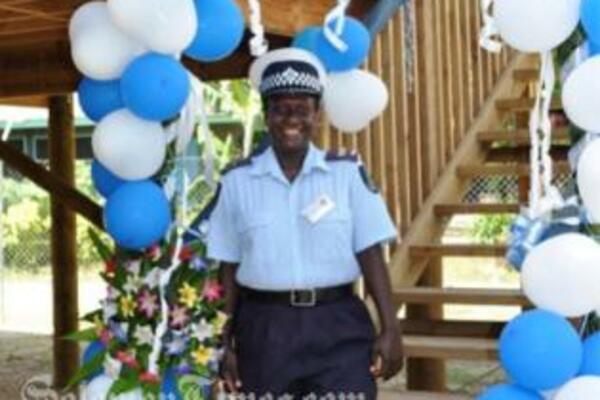 Eighty more houses being built by RAMSI throughout Solomon Islands - 50 funded by the Australian Government and 30 funded by the New Zealand Government - will be handed over in the coming months.
Source: Photo supplied
Share
Friday, 25 March 2011 07:40 AM

The keys to the first lot of new police houses were formally handed over to Royal Solomon Islands Police Force (RSIPF) officers and their families today, in a ceremony to mark an important milestone in the strengthening of the RSIPF.

The New Zealand High Commissioner, H.E Mark Ramsden, presented the keys of the first four houses to the Minister for National Security, Police and Corrective Services, James Tora, in a ceremony held at Rove Police housing compound in Honiara.

The majority of housing currently available for the Royal Solomon Islands Police Force is assessed as unfit for human habitation. The new houses will provide secure accommodation for RSIPF Officers and their immediate families, and are expected to play a key role in ensuring the RSIPF can meet policing needs across Solomon Islands, as well as helping to attract suitable candidates to the RSIPF as it continues to grow.

Minister Tora thanked the Australian and New Zealand Governments, through RAMSI, for their assistance and said the new houses would play an important role in the strengthening of the RSIPF.

Acting RSIPF Commissioner Edmond Sikua accepted the keys on behalf of the RSIPF and the house occupants from the Minister.

"Having strong, comfortable houses for officers and their families is an integral part of ensuring being a Solomon Islands police officer is something of great distinction and pride within the community," said Acting Commissioner Sikua.

"I congratulate the officers for their dedicated service to the RSIPF, and pass on my sincere thanks to the people and Governments of Australia and New Zealand for their contributions to improving opportunities for RSIPF officers and their families."

The four houses opened today are the first of the 84 houses in this round of funding being constructed across Solomon Islands. The initial 84 houses will be built at Henderson, Tetere, Rove, Lata, Noro, Munda and Gizo. The next houses to be occupied are located at Tetere and Henderson, with works expected for completion by May 2011.

The construction of this round of new houses has been jointly funded by the Australian Federal Police and the New Zealand Aid Programme, through RAMSI's Participating Police Force. The Australian Federal Police will continue to build additional houses over the next two years. These houses are an important step in RAMSI's efforts to help the RSIPF rebuild the confidence and living conditions of its members.