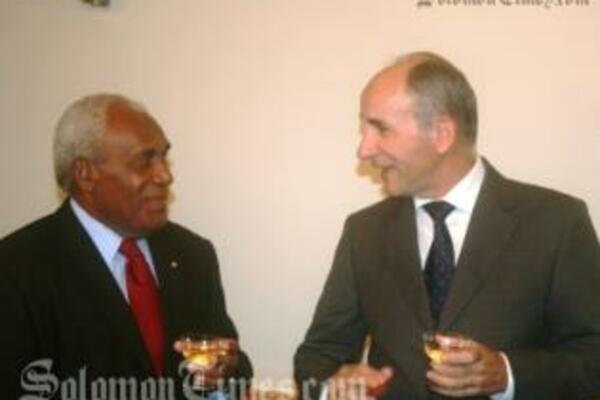 A new French diplomat has been appointed as Ambassador to Solomon Islands.

Mr Waguet has a vast experience in the South Pacific region having served as a naval officer in French Polynesia. In his 7 years civilian career, he has served as representative of the French Government and head of administration in Tahiti, Wallis and Futuna and spent some time in New Caledonia.

Mr Waguet has pledged his countries interest to work closely with Solomon Islands through corporation at both bilateral and multilateral levels.

"Many things can be done for Solomon Islands development and France as well as the European Union will make all possible efforts in favor of the intensification of their action in your country," Mr Waguet said.

The French diplomat has also noted his government's delight to assist Solomon Islands during times of natural disasters such as the April 2007 Tsunami and the recent floods in Guadalcanal. He also pledges his country's readiness to provide humanitarian assistance in future disasters.

Receiving the Ambassador, Sir Frank said the appointment of Mr Waguet will further strengthen the relationship between France and Solomon Islands. Sir Frank encouraged the French Diplomat to explore areas of mutual interests during his term as Ambassador.

"The fields of Trade, economics, investment and tourism are the potential areas for increased cooperation between our two countries and with your leadership, political dialogue will pave the way for such corporation to be explored and further developed," Sir Frank said

He also noted the construction of a health center by French authorities on Vanikoro Island in Temotu Province as an example of mutual co-operation at the grassroots level.