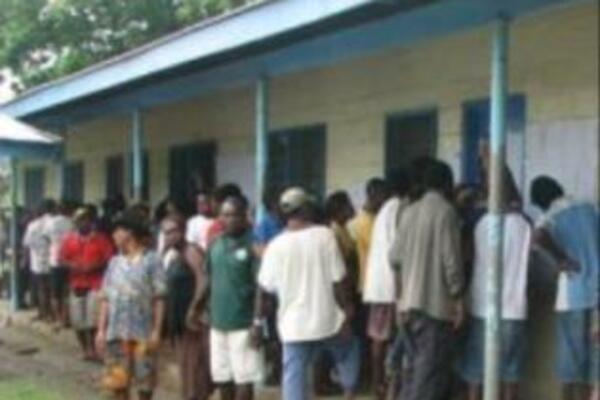 New and bigger penalties for election offences were announced yesterday by the Electoral Commission and the Royal Solomon Islands Police Force.

The new penalties cover offences such as voting more than once, voting under a different name, and giving or receiving a bribe to influence a vote.

Chief Electoral Officer, Mr Polycarp Haununu, said the offences are significantly higher than for the last national election to try and avoid people breaking the law.

"The big increases better reflect the seriousness of these offences in today's monetary values and the Electoral Commission hopes that they make people think twice about breaking the law."

The joint launch is a symbol of the partnership between the police and the Electoral Commission to make sure that this coming national general election is conducted freely, fairly and safely.

Acting Police Commissioner, Mr Walter Kola, said that it was important that the public was aware of the new penalties and called on people to come out and support the work of the police and the Electoral Commission to ensure a smooth running election.

"The police have already begun planning for Election Day and will be actively monitoring the election process and will enforce the law if offences are detected", Mr Kola said.

"If an offence is investigated and the ploice charge a person they will be taken to court."

Mr Haununu also emphasized that along with voter registration, the Electoral Commission alone cannot conduct a free and fair election.

"The Electoral Commission needs the assistance of other government agencies, and most importantly, the support of every man and woman, so that every voter has the chance to cast one vote on Election Day - free to choose, without undue influence, a person to be their voice in National Parliament for the next four years. I again urge the public to support the police and support the Electoral Commission to conduct a better national general election - it is a joint responsibility together with you, me and every good people of Solomon Islands."