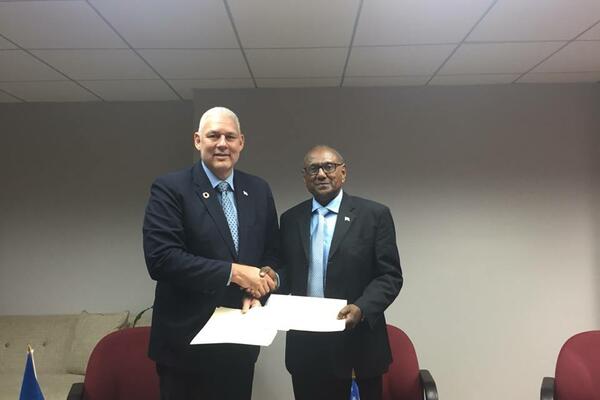 Both Foreign Ministers have agreed to pursue opportunities in the areas of tourism, transfer of knowledge, trade and culture and exchange.
Source: PM Press Secretariat
Share
Thursday, 27 September 2018 07:24 AM

The signing of the Joint Communiqué’ to formalize the ties was done by the Prime Minister and Foreign Minister of St. Lucia, Hon. Allen Chastanet and the Solomon Islands Minister of Foreign Affairs & External Trade of Hon. Milner Tozaka, at the Permanent Mission/Embassy of Saint Lucia to the United Nations, in New York.

The establishment of diplomatic relations is part of SIDCCG’s Foreign Policy in expanding Solomon Island’s reach to the Caribbean and American region.

However, this recent signing is expected to formalize diplomatic relationships between both countries.

This was something both leaders have expressed and agree to assist and learn from each other.

“We share an interest in developing economies that are resilient with stand economic and environmental pressures. Therefore, formalizing of diplomatic relations also means, both countries can enhance collective effort in addressing Climate Change issues,” he said.

Both foreign ministers have also agreed to pursue opportunities particularly in the areas of tourism, transfer of knowledge, trade and culture and exchange.