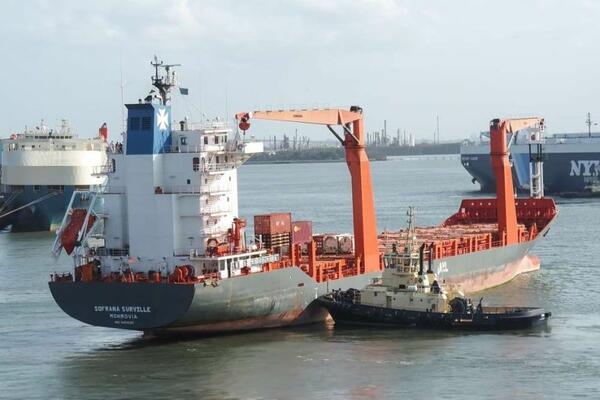 The Sofrana Surville cargo boat is linked to a COVID-19 strain never before seen in NZ.
Source: ABC
Share
Tuesday, 27 October 2020 09:31 AM

A New Zealand port worker, who tested positive for COVID-19, carries a strain never before detected in New Zealand. Genomic testing of the port worker's virus found that it is in fact a new strain.

The port worker did some routine work aboard the Sofrana Surville on the 12th and 13th of October 2020, leading authorities to believe that he may have been infected while working inside the boat. The port worker was said to be wearing PPE while conducting maintenance work.

NZ Health Director-General Ashley Bloomfield confirmed that two others have also been infected after coming into contact with the port worker.

Dr Bloomfield said while there were thousands of subtypes of the virus around the world, the global database was "heavily weighted" towards the strains reported by high-income countries including the UK, US, European countries, Australia, and New Zealand.

"So, what we've seen here is this strain is a new one, in that it's not any of the ones we've had reported here in New Zealand previously," he said.

"Now we're working to see if it matches a strain that's on an international database, but at the moment the suggestion is it doesn't and so it's probably from a country that doesn't necessarily have either the capacity or the ability to do whole genome sequencing routinely and report that to the global database."

The Sofrana Surville had travelled from Papua New Guinea to Solomon Islands to Brisbane to Tauranga, and then to Auckland.

The port worker, who was an engineer, was on board on the 12th and 13th October and was wearing PPE while conducting maintenance work.

The Sofrana Surville travelled to Noumea shortly after and is now in Australia. The ship was ordered to anchor off the coast of Mooloolaba instead of docking in Brisbane as planned.