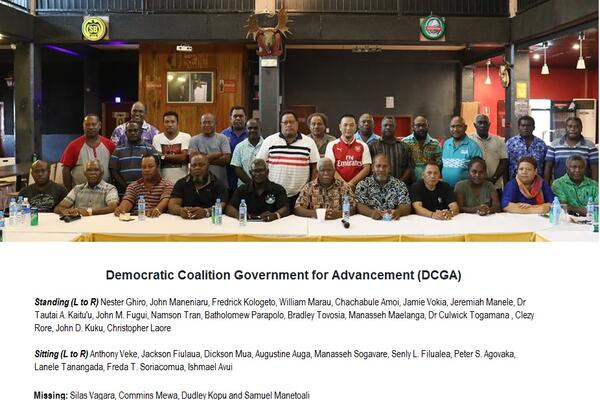 A newly formed Democratic Coalition Government for Advancement (DCGA) has signed a coalition agreement to form the next government.

A statement from the coalition group confirms that Members of Parliament elect aligned with each of the four Parties together with Party Executives have agreed to merge and combine their policies in the best interests of stability and consistency.

The group has a total of 33 MP elects with only 28 who were present for the photo shoot.

“DCGA consist of leaders with integrity who believe in consistency, stability and the need to form government based on shared values and the democratic principles of transparency and accountability that does not require inducements to auger solidarity,” the statement reads.

DCGA is comprised of majority of former MP’s and most of the newly elected MPs with an intention to build on the foundation of key policies designed to support economic progress and prioritize essential services and social development, based on continuity and consistency.

"The DCGA believes in stability as paramount to progress and is committed to ensure political stability throughout its tenure in office to ensure efficient delivery of targeted objectives," the statement says.

According to the statement, the leaders have bypassed the usual practice of lobbying and camping in hotels and have independently made their decisions to be part of the DCGA.

“We have set precedence in the manner and process by which previous governments have been formed those accords leaders the dignity and respect they deserve to make informed decisions based on the best interests of the nation and the people they have been elected to represent,” the statement said.

The DCGA has a good representation of MP’s Elect from all the provinces across the country that truly reflects unity in diversity.