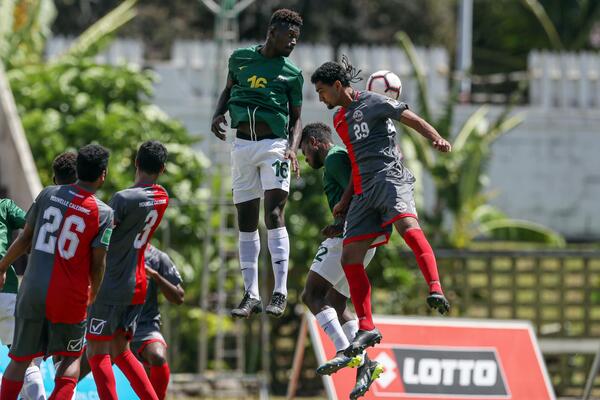 Rocky remained at the centre of things early in the second half, his header forcing a smart save from Wareen Hlupa.
Source: OFC
Share
Monday, 19 September 2022 12:10 PM

New Caledonia have set up an OFC U-19 Championship 2022 semi-final clash with Fiji after claiming a tight 1-0 triumph over the Solomon Islands in their quarter-final clash at Stade Pater in Papeete, Tahiti.

Willy Read’s early penalty proved enough for victory in a physical clash, with the Solomon Islands ending the game with 10 men.

These two sides met twice in the 2018 edition, as both reached the semi-final stage. On this occasion, only one would be making it to the final four and New Caledonia had the perfect start.

Billy Afi bundled over Read in the box and the striker made no mistake from the penalty spot to give New Caledonia an early lead.

New Caledonia continued to pile on the pressure, with Paul Jone, Saké Forest and Tyeou Boano all having opportunities to stretch the lead.

The Solomon Islands soon recovered from their difficult start and began to threaten, particularly on the counter-attack. Junior Rocky should have taken advantage of this renewed surge late in the half, but the forward blazed his close-range effort high and wide.

Tempers flared at the end of an often tetchy opening period. The Solomon Islands took exception to a deliberate handball which prevented a promising breakaway with New Caledonia captain Forest and Solomons attacker Rocky both entering referee Calvin Berg’s book for the resultant pushing and shoving.

Rocky remained at the centre of things early in the second half, his header forcing a smart save from Wareen Hlupa.

Next it was the turn of the Solomon Islands goalkeeper to spring into action, Junior Petua, who did well to keep out Read’s powerful half-volley.

Afi then headed the Solomon Islands’ best chance to level the score over the bar but the Solomons, who finished the game with 10 men after Joel Luiramo saw red, could not find the equaliser as New Caledonia reached a third successive semi-final at this tournament.

New Caledonia will now face Fiji in the semi-finals on Wednesday, September 21 with a place in the OFC U-19 Championship 2022 final and the FIFA U-20 World Cup 2023 on the line.