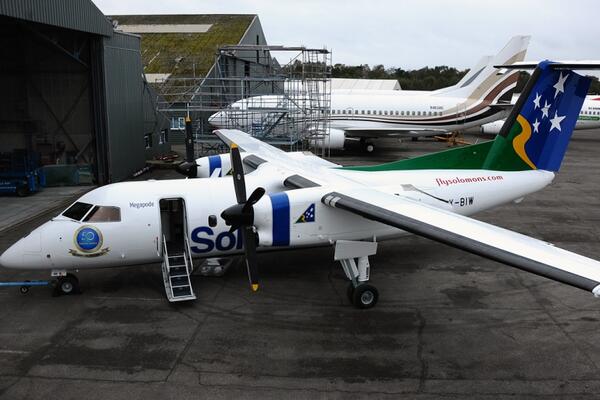 Solomon Airlines was able to demonstrate its creditworthiness, and the viability of the project, which was to purchase the Dash-8 aircraft, Megapode.
Source: Mark Empson
Share
Wednesday, 12 June 2013 11:52 AM

The Finance Minister, Rick Hou, says the rules and guidelines for SOEs will ensure their borrowing does not pose an unacceptable risk for the government.

The government says the new policy is aimed at getting the firms to operate as profitable and efficient businesses while managing total debt levels.

Under the new policy the government will provide practical guidance to SOEs and place certain requirements on them including demonstrating creditworthiness, and having current audited financial statements of good standing.

The Minister clarified that the debts of SOEs are a contingent liability to Government.

“While SIG does not have a legal liability to pay SOE debt, it is sometimes obliged to do so to keep essential services operating. Moreover, debts of SOEs are included in the analysis of total public sector debt sustainability and affordability for SIG,” Mr Hou explained.

Minister Hou further clarified that the SOE Borrowing Policy is intended to provide a balance between allowing SOEs to operate as profitable and efficient businesses with managing total sector debt levels. It will do this by:

1. Providing practical guidance for SOEs proposing borrowing;
2. Describing the factors that the Debt Management Advisory Committee will use to assess SOE borrowing proposals;
3. Requiring SOEs to demonstrate that they are creditworthy and that the project for which they are borrowing is viable;
4. Requiring SOEs to have current audited financial statements of good standing, be up to date with NPF payments, and comply with tax laws;
5. Providing guidelines for the extent to which SOE borrowing should count towards the annual limit on new borrowing;
6. Outlining the nature of the advice to be given to the Finance Minister on SOE borrowing proposals;
7. Encouraging early engagement with SOEs on their borrowing proposal plans and business plans; and
8. Encouraging business-like behavior of SOEs.

Minister Hou revealed that in 2012 Solomon Airlines presented a borrowing proposal to the Debt Management Advisory Committee, which recommended the proposal to the Finance Minister for approval.

In this regard Solomon Airlines was able to demonstrate its creditworthiness, and the viability of the project, which was to purchase the Dash-8 aircraft, Megapode.