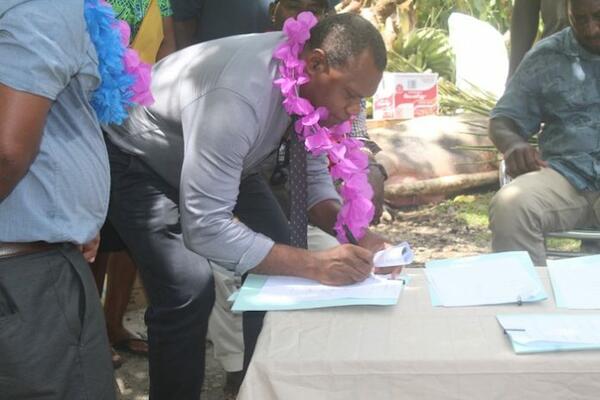 The Solomon Islands Ministry of Fisheries has taken the major step forward in realizing its goal to re-develop the former ICLARM site at Aruligo, West Guadalcanal into a National Aquaculture Centre.

This was made formalized through the traditional Chupu presentation, a widely practiced custom on Guadalcanal which still holds a lot of practical and cultural significance to the people on the island.

It also heralded the beginning of new a chapter as the Ministry of Fisheries moves closer to achieving one of its development goals to develop Aruligo into a national aquaculture centre.

Acting Permanent Secretary Mr Ferral Lasi who made the presentation on behalf of the Ministry of Fisheries acknowledged the traditional obligation to present the Chupu saying, it signifies the formal notification of the Ministry’s return.

Mr Lasi also acknowledged the important roles tribal leaders’, community leaders, chiefs and church leaders play to support the implementation of national projects in the Solomon Islands. In particular, the establishment of the Aquaculture hatchery and research centre here at Aruligo, Northwest Guadalcanal.

He said his Ministry believes in community participation and inclusiveness in its efforts to revive aquaculture development activities at Aruligo.

Following a series of consultations with stakeholders, it was agreed that the Ministry of Fisheries organise the chupu so that all stakeholders are informed of this national government’s intentions to revive aquaculture activities on the abandoned land.

Those who spoke on the occasion had expressed their support for the project.

Acting Deputy Premier of Guadalcanal Province Mr. Peter Araonisaka said the provincial government fully supported this undertaking and assured the Ministry of Fisheries and Marine Resources of their support.

“The chupu ceremony showed the seriousness of the national government to bring this national project down to us close to us on and you must respect it,” he said.

With this hatchery, it will help not only those of us on Guadalcanal but also those from other provinces who will come and learn from this center.

“This is our pride because other people from around the country will come and train at the new Aquaculture Centre,” he added.

The acting deputy premier thanked the Ministry of Fisheries and the government for choosing Aruligo as a site for development for the project.

“Indeed this development aligns with Guadalcanal Fisheries division and the provincial government strategic action plan to develop inland aquaculture within the province,” he added.

The Acting Deputy Premier urged the surrounding communities to take ownership of the project by looking after the facilities and not to disturb it.

“To have such a project established takes time as highlighted by the Acting Permanent Secretary of the Ministry of Fisheries but to destroy it can take seconds, therefore, I urge you all to looks after this project,” said Mr. Araonisaka.

President of Guadalcanal Post Conflict Rehabilitation Reconciliation Restoration Association Joseph Sangu who received the Chuppu on behalf of his organization also spoke reminding the recipients to realize the obligations and responsibilities that come with the chupu in accordance with Guadalcanal custom.

“The responsibility of ensuring that the Aruligo facility is protected, respected and supported to ensuring a trouble-free and conducive working environment,” he said.