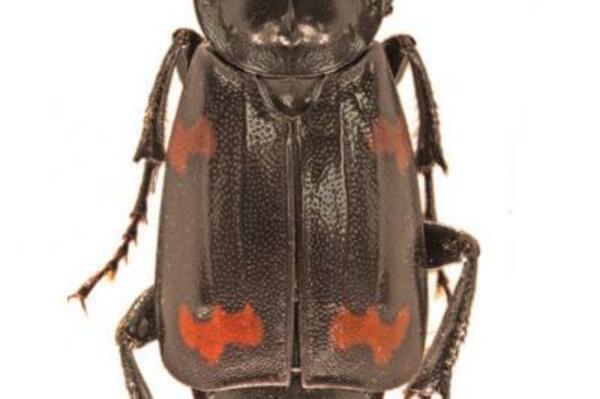 The Nicrophorus efferens are a part of six other specimens collected in 1968. But they were unrecognised as well as undescribed species for more than 40 years.
Source: Photo supplied
Share
Thursday, 27 June 2013 09:16 AM

Scientists of University of Alaska Museum discovered a new species of burying beetle from the Solomon Islands archipelago.

The new species is named Nicrophorus efferens. Burying beetles are known for large size, interesting reproductive behaviour as well as striking black and red colours. This species bury the small vertebrate carcasses which are eaten in underground crypt by their offspring.

The Nicrophorus efferens are a part of six other specimens collected in 1968. But they were unrecognised as well as undescribed species for more than 40 years.

Second author of this study, Tonya Mousseau visited Hawaii and decided to look burying beetles which were held by the Bishop Museum. The PhD research conducted by her focused on biogeography and evolution of a subgroup of these beetles.

• Burying beetles or sexton beetles are the members of Silphidae (carrion beetles).
• The primary feature of these beetles is that they are black in colour and have red markings on their forewings.
• Burying beetles, as the name says it all, bury the carcasses of small vertebrates like rodents and birds as food source for their offspring.
• Among various insects, these are the most unusual ones because both female as well as male protect their offspring.