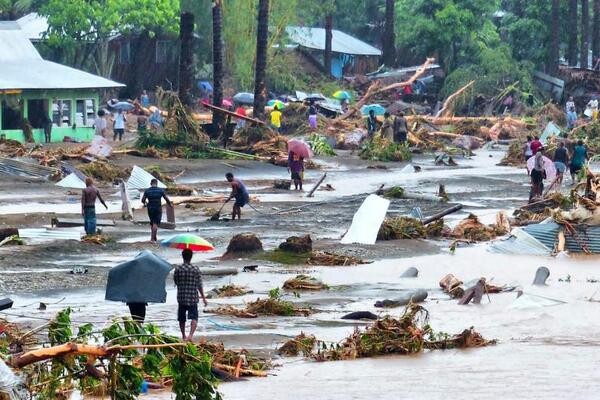 Those victims who have been repatriated in the past weeks have been assisted with repatriation kits including food, tools and other basic necessities that enabled them to restart their lives.
Source: abc.net.au
Share
Tuesday, 06 May 2014 07:23 AM

The Solomon Islands National Disaster Management Office (NDMO) has strongly dismissed rumors that the Government will provide “cash grants” as part of a repatriation package to families affected by last month’ s flooding.

The announcement has been re-issued yesterday following the spread of rumors by certain groups and individuals at the Panatina Campus Pavillion and the FOPA Village evacuation centers.

The NDMO has warned individuals and groups spreading false rumors to refrain from raising false expectations among victims who have already suffered from the recent disaster.

NDMO further warned that spreading false rumors is a crime and those responsible will face the full force of law if caught.

Meanwhile, the NDMO continues to encourage affected families to return home while responsible authorities take care of their needs in the short term.

Those who have been repatriated in the past weeks have been assisted with repatriation kits including food, tools and other basic necessities that enabled them to restart their lives.

Permanent Secretary of the Ministry of Environment, Climate Change and Meteorology and Chair of the National Disaster Council, Dr Melchior Mataki congratulated those who have voluntarily repatriated back to their homes.

“We would continue to encourage families whose homes and communities were not swept away during the floods to return home and restart their own lives as we will continue to support them in the short term,” he said.

The NDMO is also concerned that the longer people live in over-crowded evacuation centers their lives, especially, children and mothers are at risk of disease outbreaks.