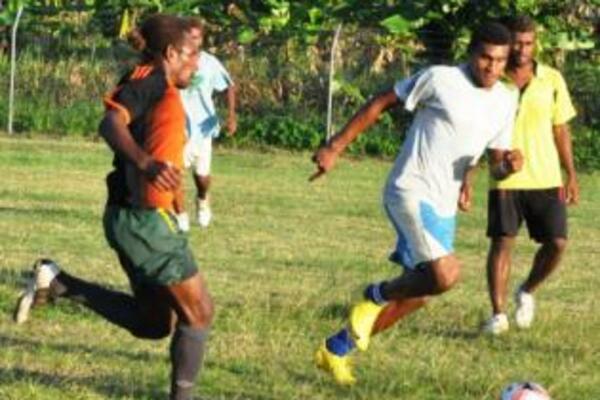 Wagapu said that he is happy with the turn out and the energy the players have put into their training on the first day.
Source: Photo Supplied
Share
Friday, 03 September 2010 09:22 AM

The Solomon Islands Men's National U-20 Training Squad has begun its preparations for the Oceania Football Confederation (OFC) U-20 FIFA World Cup Qualifiers in April 2011.

Yesterday 36 of the 40 players in the training squad turned up for training at the SIFF Academy football field under the watchful eye of Noel Wagapu, the Solomon Islands Football Federation (SIFF) Development Officer is assigned to look after the team until a coach is appointed.

Wagapu said that he is happy with the turn out and the energy the players have put into their training on the first day.

Morale amongst the players was high as most appeared to enjoy their first official training session after the selection trials were completed about 2 weeks ago.
These players are the elite U-20 players in Solomon Islands having being selected from a pool of 132 players from the trials.

One of the selectees, Jilini Junior said that he is happy to be selected for the U-20 national team.

"This is the furthest I've reached in my playing career and it is an important personal achievement for me," Junior said. "However, I know that this is just the training squad so I intend to work hard and prove myself worthy for the final team that will represent Solomon Islands."

Indeed this is just the training squad and caretaker coach Wagapu said that the assessment of the players will continue over the next 2 months.

"The selection team will continue measuring the performance of the players especially in the coming 2 months. After the 2 months we will name the final 30 players in the final squad for the OFC U-20 championship," Wagapu said.

Wagapu also encouraged all the players to be consistent with their attendance of training and also to behave as members of the national team both inside and outside of football.

Wagapu also reminded players who have not supplied their passports or birth certificates to the office to do so or they will be dropped automatically within the next 2 weeks.

The tentative training program schedules 3 days of work for the national U-20 training squad so as to enable the players to train with their clubs in the other 2 days.

However, this schedule may change in the face of pressure from some clubs who want more time with their players.

The final squad of 30 players is likely to be announced in November.