National U-17 Women Step Up Training for OFC Championship 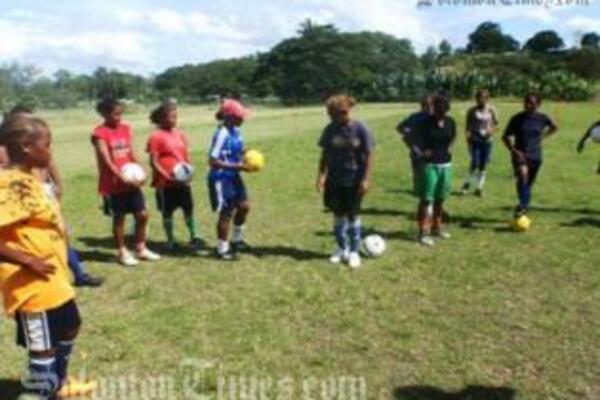 "Time is no luxury in this instance and we need to achieve a lot within the next 2 months," Ms. Justus said.
Source: Photo Supplied
Share
Monday, 01 February 2010 09:18 AM

The Solomon Islands Football Federation (SIFF) National U-17 Women's Training Squad has stepped up its training this week in a bid to boost the team's preparation for the upcoming Oceania Football Confederation (OFC) U-17 Women's Championship in April.

The move comes only after the team's first week of training. Diane Justus, who is supervising the training until a coach is appointed, said that they needed to build the players' confidence and their physical strength quickly so it is necessary to be intensive very early.

"Time is no luxury in this instance and we need to achieve a lot within the next 2 months," Ms. Justus said. Ms. Justus also said that some of the players are very young and needed extra time to gain confidence for competing at this level.

Originally the plan was for the team to hold training sessions only 2 times per week for January and February but this has been increased to 5 sessions per week. "After observing the girls in the first week of training I concluded that we needed to work a couple more days a week to ensure that the required level of skill and fitness is achieved," Ms. Justus said.

Ms. Justus explained that in the first 2 weeks the team worked on ball control, agility, balance and other skill based drills. Each training session is followed with small sided games which were employed to allow the players to practice and perfect their skills.

From next week the team will work on body strength and the team will have some gym training. "It is essential that we build muscle strength since it is an essential characteristic of a player when you are competing at the regional level," Ms. Justus explained.

The gym sessions will be accompanied by advanced tactical training which will be followed by friendly matches. The National U-17 Women's Squad training program anticipates friendly matches with local women's clubs and junior men's teams.

Diane Justus, who works as the SIFF Women's Development Officer, is a qualified coach holding an OFC Senior Coaching License. She has also attended FIFA and English FA coaching courses held locally and overseas. Ms. Justus was key in the selection of the team and currently she is looking after the team's training.

Noel Wagapu, the SIFF Senior Development Officer, confirmed today that the appointment of a coach and team officials for the National U-17 Women's Team will be announced next week.