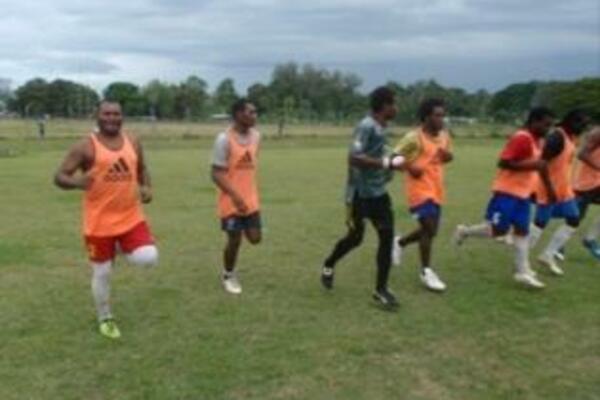 The biggest tour of duty will be to the 2011 South Pacific Games in New Caledonia.
Source: Photo Supplied
Share
Friday, 19 February 2010 10:14 AM

The trials for the selection of the Senior National Team currently being held at the Solomon Islands Football Federation (SIFF) Academy grounds will end on Monday (22nd February 2010).

Noel Wagapu, coordinator of the national team selection program, said that players are being given some time to rest before the final day of trials. The number of players who have turned up for the program is less than expected but organizers are happy with what has been achieved.

"We started a bit slowly but the quality of the players more than makes up for the number and I am confident that the program has met its objectives," Wagapu said.

The trials kicked off on 15th February with about 30 players opening the first set of trial matches. This number increased on the second and third day with more of the senior national players turning up for the trials including Gideon Omokirio, Judd Molea and Henry Fa'arodo.

The original plan was for the program to continue throughout this week but this was changed because the turn up did not require as many days as earlier anticipated. The organizers, therefore, decided to give the players 3 days to rest before the final trial match next week.

The National Team Selection Panel has come with 2 preliminary squads composed of players selected from the first 3 days of trials. These 2 teams will play each other on Monday in what will be the final assessment match for this part of the selection program. The final selection for the Senior National Training Squad will be done during this match.

Wagapu acknowledged that some of the top players in the country are overseas and were not able to attend the trials. However, he explained that these players may attend further trials that will be held later on in the year and can still make it into the Senior National Team.

Quite a number of the players who participated in the trials are below 20 years of age so the selection panel has decided to place them in a holding list for the National U-20 Team. The National U-20 Team will be called later this year to prepare for the Oceania Football Confederation (OFC) U-20 Championship in Auckland in 2011.
The Senior National Team is scheduled to play 2 international matches in 2010 including the Wantok Cup match with Vanuatu in July.

The biggest tour of duty will be to the 2011 South Pacific Games in New Caledonia and SIFF is hoping that this early start with the preparations will help Solomon Islands turn its fortunes at the competition.